While shortages of the Apple TV at numerous high-profile resellers have been documented for weeks and part numbers indicating an update alongside the iPad 3 next week have been revealed, AppleInsider now notes that Apple has specifically been stalling in delivering promised shipments of the device to resellers.

For three consecutive weeks, the Cupertino-based company has failed to make good on its promissory to restock indirect channel partners with fresh inventory of the existing $99 Apple TV product, say people familiar with matter.

Instead, partners and channel members have seen Apple push back deliveries each consecutive week by one additional week -- a practice that almost always foreshadows a formal discontinuation of a product ahead of new models.

Even Apple's own stores are beginning to see shortages of the device as Apple draws down supplies ahead of the refresh. While the company's online store is still reflecting an "in stock" status, those customers opting for the in-store pickup option will find that many Apple retail stores are currently out of stock. 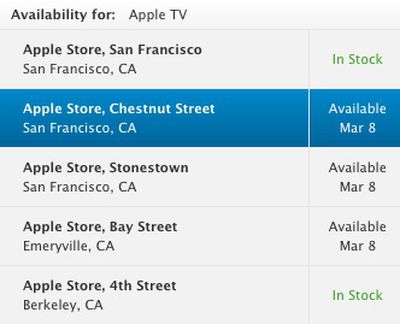 For those locations currently out of stock of the Apple TV, the company can still ship orders to the stores for pickup, but even those shipments are starting to see extended timeframes. While U.S. stores east of the Mississippi could generally have an Apple TV ordered today available for pickup by March 3, delays increase moving farther west across the country. Stores in the middle of the country are showing availability on March 6, while those in the Southwest and Southern California are citing March 7 availability and those in the Pacific Northwest down to the Bay Area can't promise availability until March 8.

Apple's iPad 3 media event is scheduled for next Wednesday, March 7, and it appears that the updated Apple TV set-top box will be making an appearance at that time.

Xvid/Divx support, app support for Plex, and THEN I would buy one to get rid of my HTPC

I know this is lame, but it'd be nice to buy either a white or black one. But I'll probably buy a black one since all of my tv/entertainment section is all black. I wouldn't mind an even smaller Apple TV 3


No - it needs to be the same size, so that I can replace it without my wife noticing!

Will AirPlay Mirroring in Mountain Lion allow for any type of video playback on the Apple TV? For example, if I play an .avi on my Mac would I be able to view it on my TV?

borgqueenx
thats proof enough to me.
Just make it have 1080p and i will have one.
Score: 9 Votes (Like | Disagree)

loveapple89776
Movies - iTunes in the Cloud

Surely Apple needs to expand their iTunes in the Cloud functionality to include the re-download of movies.

Once this is added, being able to stream purchased movies on the appleTV from your account, got to be the logical step to take.
No need to have a computer running, or hard-drive spaced filled with movies.

Obviously though, this is entirely down to licensing issues.
Score: 8 Votes (Like | Disagree)

Apple will definately NOT include a USB port to stream movies without a separate computer.


Apple definitely did include a hard drive in the first generation for local storage. And a jailbreak solution with that generation made it possible to turn the USB port linked to a much bigger hard drive into a large, local repository of iTunes media. For many, they could turn those computers off because all the video they had could be stored there.

And by the way, the second generation has a USB port too (but it is not unlocked for that local storage use).

The Apple TV is a device to display what is on your iPad, iPhone, computer or in the cloud (i.e. netflix, etc.). I want to have my 3 Apple TVs in the house behave the same, and I can't do that with different external hard drives plugged into it. If that is what you want, then the Apple TV isn't for you.


Good for you and using the streaming from central storage hooked to a computer makes great sense for you. Not everyone is you though. Some have 1 :apple:TV hooked to 1 television. They would like the OPTION of storing their media on it so that they can enjoy that media when the computer is turned off and/or when the computer is away from the home. Giving them that option makes the device more appealing to more people so that Apple can sell more.

You don't want that option? Don't use it. But it's not wrong for others to want that option even though you don't. In my own situation, I'd love that flexibility and take great advantage of it. I still have generation 1 somewhat because the local storage is useful to me.
Score: 5 Votes (Like | Disagree)
Read All Comments