Apple Releases Xcode 4.3, Now Offered as App Instead of Installer

Apple today released Xcode 4.3 [Mac App Store], making a number of improvements to the software. Among the notable changes, Xcode is now offered directly as an app. It had previously been offered as an installer package, and the move simplifies the installation and update process.

Xcode is now distributed as an application, rather than as an installer. This change enables Xcode to be updated directly from the Mac App Store.

Xcode is a free download, but users must be registered members of Apple's iOS or Mac Developer Program in order to submit apps created with Xcode to the respective App Stores.

Awesome, even the dev tools are being dumbed down.


How is it dumbed down? It's simply just better management. Should have been this way years ago IMO.
Score: 4 Votes (Like | Disagree)

mdriftmeyer
XCode 4.4 will be the big jump from Clang 3.0 -> Clang 3.1 where C++11 is fully implemented and all the Macroscalar patented hints are implemented within libc++ [a drop in replacement to libstdc++ from GNU].

Tons of info over at LLVM/Clang:

Release notes for 3.1 are not any where close to current:

But it's safe to say XCode 4.4 will be a big hit for the Tools and maturity of LLVM/Clang.

Clang 3.1 also ends cuts off backward compatibility of bitcodes at 3.0 and forward.


LLVM 3.1 removes support for reading LLVM 2.9 bitcode files. Going forward, we aim for all future versions of LLVM to read bitcode files and .ll files produced by LLVM 3.0 and later.

Tons of work going on with Vectorization and gaining advanced vector instruct set full support for AMD and Intel, not to mention ARM.

All important changes going to Xcode 4.3 are highlighted here:

Plus I have a new "Install Xcode" app in the applications folder (version 4.2.1).

What do I do? And what about all the other stuff in the developer folder?

Xcode 4.3 is one unified Application with all the Tools launched within Xcode.

balamw
If this change facilitates the delta updates instead of requiring a huge download for every minor update, I'm all for it.

Or is it just as simple as dragging the previous Developer folder into the trash?


I left Xcode 4.2 where it was and installed 4.3 from the AppStore, once I launched the AppStore version I got this screen to help with the migration... 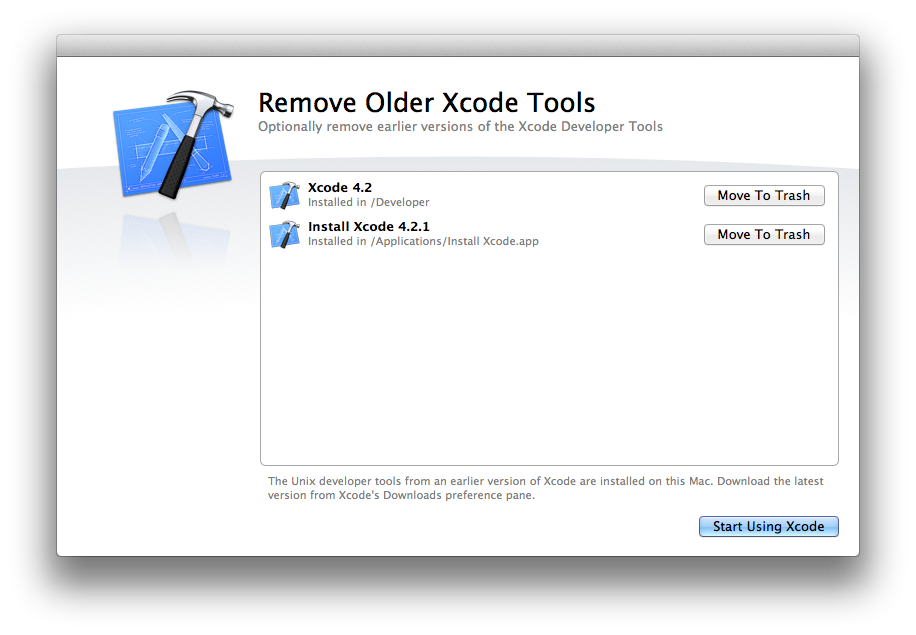 Do you mean it does this when I launch the new version? Because the developer folder and the old version are still there at the moment

That is the problem. The other tools downloads (graphics, IO, audio, dashcode, auxiliary and accessibility) are just apps inside the DMG and I have no idea where one is supposed to place them.


They appear to be all self contained apps, so looks like you can put them anywhere.

But I agree, it is a bit odd for Apple to just give you a dmg with apps. They should at least give a read me saying you can put them anywhere.
Score: 1 Votes (Like | Disagree)
Read All Comments