According to new survey data from the Pew Internet & American Life Project (via VentureBeat), the share of U.S. adults owning a tablet device nearly doubled during the most recent holiday season, moving from 10% to 19% between mid-December and early January. While the introduction of Amazon's Kindle Fire certainly played a significant role in the tablet growth, the news still bodes well for Apple's iPad performance during the quarter.

These findings are striking because they come after a period from mid-2011 into the autumn in which there was not much change in the ownership of tablets and e-book readers. However, as the holiday gift-giving season approached the marketplace for both devices dramatically shifted. In the tablet world, Amazon’s Kindle Fire and Barnes and Noble’s Nook Tablet were introduced at considerably cheaper prices than other tablets.

Apple's iPad dominated tablet sales following its early 2010 debut as competitors struggled to find traction in the marketplace, but the Kindle Fire has been seen as perhaps the best-equipped product to take on the iPad given its much lower pricing ($199) and its integration with Amazon's significant services and large customer base. But while the Kindle Fire is selling well according to estimates, its effect on iPad sales has been the subject of considerable debate given the significant differences in hardware and target markets between the two devices. 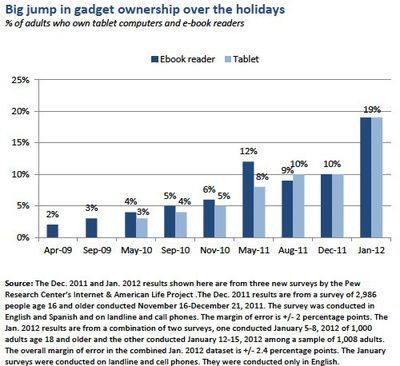 Apple is of course rumored to be introducing the iPad 3 in the coming months, amid reports that it will continue to offer the iPad 2 at a lower entry-level price. Even so, Apple will be unlikely to match or closely approach the Kindle Fire's $199 pricing given the iPad's larger size and differences in the two companies' approaches to the tablet market. Apple focuses on profitability for its hardware products with content providing a supporting role at much smaller margins, while Amazon is willing to sell hardware essentially at cost in order to support profitability in its massive shopping and content offerings.

Apple is also pushing for greater adoption of the iPad in the education market with its just-launched iBooks Textbooks initiative. Envisioning a future in which students carry all of their textbooks in the form of interactive iBookstore downloads on iPads, the company is seeking to drive innovation and engagement in education while making the iPad the tablet of choice for students of all ages.

Ryth
Comparing the Kindle Fire to the iPad is like comparing a bicycle to a car.

Sure they are both modes of transportation to get you places but the car offers way more things then the bike can ever offer.
Score: 8 Votes (Like | Disagree)

I disagree about apple not being able to match kindles pricing. Apple has assloads of cash, and if they really wanted to sell the iPad at cost or even at a slight loss, they would still make up the money in apps just like amazon does with it's prime subscriptions.


And just how do you think they came up with that cash?
By selling products slightly under cost and making it up in volume?:-)
Score: 7 Votes (Like | Disagree)

The adults probably gave their e-book readers to their kids and purchased iPads for themselves. They ditched their junk and got the real thing.


If all I wanted to do was read books, I'd probably get a Kindle over an iPad. Why? It's considerably less expensive, and the screen is arguably better for reading text on for longer periods of time.

Hardly what I'd call junk. Rather, I consider it a more focused device.
Score: 5 Votes (Like | Disagree)

Comparing the Kindle Fire to the iPad is like comparing a bicycle to a car.

Sure they are both modes of transportation to get you places but the car offers way more things then the bike can ever offer.

The trend I have personally seen is Parents buying the iPad for themselves but buying the Kindle Fire for their child. Being smaller, the Fire is easier to hold in the child's hands. The screen size with it's smaller finger target is no problem for a child's digits. The price is much easier to justify for such sophisticated technology.

I talked to one such parent recently and he explained that while he thinks the iPad is superior in just about every way, he couldn't even consider another $500 purchase for a Christmas gift for an 8-year old. The $199 was easier to swallow. Apps are cheap for the Fire, too. And he liked the fact that, because he is an Amazon Prime member, his son can stream movies and TV shows over wi-fi for free with the annual plan from Amazon.

Is it as fluid as an iPad? No. There are great limitations when comparing the two. However, the Fire software will continue to improve and become a better and better value, especially at the $199 price point.

Personally, I think Apple truly should put out a smaller cheaper version for just such users. It's better than the person not having anything at all OR going to the competition. Also, I'd buy one and I already the iPad. An iOS device somewhere between an iPad and an iPhone would greatly increase the chance that I would carry it more often than I currently carry my iPad out of doors.
Score: 5 Votes (Like | Disagree)

So what Amazon is doing is illegal?

No. Prices can competitive and products can be sold as loss leaders (both are common practices). What would be illegal is if Dominant Company A dropped prices on it products absurdly low for an extend period of time (like to the point that the whole company was losing money) for the specific purpose of driving its less wealthy competition out of business and the raised prices back to normal levels.

Like a lot of things, the difference between legal and not depends on the severity of the action and the situation. 1mph won't get your pulled over but 30mph over surely will. But if you are going 30mph over on the way to the hospital because the passenger in your car is bleeding to death and you are trying to save their life then you probably aren't going to get arrested.

It's funny that they still think there's a "tablet" market when all evidence shows otherwise.


Agreed, no one is buying tablets, they're buying iPads.
Score: 2 Votes (Like | Disagree)
Read All Comments

Friday May 20, 2022 6:50 am PDT by Joe Rossignol
Earlier this week, The Information's Wayne Ma outlined struggles that Apple has faced during the development of its long-rumored AR/VR headset. Now, in a follow-up report, he has shared several additional details about the wearable device. Apple headset render created by Ian Zelbo based on The Information reporting For starters, one of the headset's marquee features is said to be lifelike...
Read Full Article • 139 comments

Wednesday May 18, 2022 9:00 am PDT by Joe Rossignol
Apple today shared a new ad highlighting iPhone privacy features like App Tracking Transparency and Mail Privacy Protection that are designed to give users more transparency and control when it comes to their personal data being collected. The ad revolves around a young woman named Ellie who discovers that her personal data is being sold at an auction house, with bids being placed on her...
Read Full Article • 116 comments

Saturday May 21, 2022 9:00 am PDT by Hartley Charlton
With around four months to go before Apple is expected to unveil the iPhone 14 lineup, the overwhelming majority of rumors related to the new devices so far have focused on the iPhone 14 Pro, rather than the standard iPhone 14 – leading to questions about how different the iPhone 14 will actually be from its predecessor, the iPhone 13. The iPhone 14 Pro and iPhone 14 Pro Max are expected...
Read Full Article • 214 comments