In a wide-ranging interview with the BBC, former Apple CEO John Sculley was asked about Jobs killing off the Newton, and what he thought of the product in retrospect. Sculley admitted that the Newton was "clearly too ambitious" but nailed "many of the concepts."

Perhaps most importantly, Sculley points out that Apple had to develop a new type of microprocessor to power the Newton, co-founding a company called ARM Holdings. Processors based on those developed for the Newton now power most of the smartphones and tablets in the world.

Well the facts are that we had to create a new microprocessor for the Newton as there was no low-powered microprocessor that could handle object orientated programming.

So when we were creating Newton we also co-founded a company called Arm.

Apple owned 47% of it, Olivetti owned 47% and the founder Hermann Hauser owned the rest.

Sculley is clearly proud of the fact that even though the Newton failed, the technology behind it succeeded.

In the interview, Sculley also discusses Walter Isaacson's biography of Jobs, which he says he hasn't read; his and Jobs' relationship; what he's up to these days, including a large investment in social health company Audax Health; and what he thinks of a possible Apple television.

Torrijos
Had Sculley let Jobs push Apple towards a mainstream consumer market, instead of the business crowd he favored, only god knows what world we would be living in right now.

Newton was great for its time (it even managed to read my horrible scribbles) but the state of the company was so dire that Apple had to renounce the project and worst still sell its huge shares of ARM. (imagine if Apple still possessed 47% of ARM for the iPod revolution and the subsequent iPhone one!)
Score: 9 Votes (Like | Disagree)

coder12
The Newton had a beautiful logo, I love it! The iPad doesn't have an emblem really; not that it needs one.

Had Sculley let Jobs push Apple towards a mainstream consumer market, instead of the business crowd he favored, only god knows what world we would be living in right now.

Newton was great for its time (it even managed to read my horrible scribbles) but the state of the company was so dire that Apple had to renounce the project and worst still sell its huge shares of ARM. (imagine if Apple still possessed 47% of ARM for the iPod revolution and the subsequent iPhone one!)


I think it would be no were close to where it is today. Part of the reason ARM is so great is the fact that everyone can use it. Remember Apple does not have share very well with others and would not of let ARM get out in the open for others to improve on it.

Sculley was a horrible choice by Steve and it nearly killed Apple but in the end it taught Apple and Steve an invaluable lesson. As for whatever Sculley has to say today, /yawn. He should've stuck with selling sugar water.


In many ways Sculley saved Apple from Steve Jobs. If it was not for Sculley Apple would of died a long time again. Remember even Steve Jobs said if he was not fired from Apple he (Steve Jobs) would of caused it to go under. It forced Jobs to grow up and become better.

Sculley in many ways saved Apple by firing Steve Jobs and forcing Jobs to grow up.
Score: 5 Votes (Like | Disagree)

mrsir2009
Man, I never realized how big the Newton is :eek: 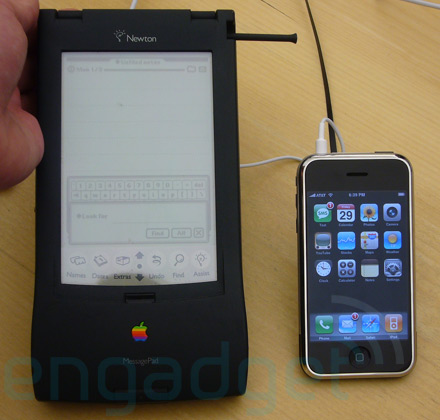 Sculley was a horrible choice by Steve and it nearly killed Apple but in the end it taught Apple and Steve an invaluable lesson. As for whatever Sculley has to say today, /yawn. He should've stuck with selling sugar water.


Think on this. Jobs wanted the Apple ][ line dead and immediately. He was fully prepared to kill it off and only wanted to focus on the Mac line. You know Jobs, out with the old and in with the new and damn the consequences.

It was Sculley who paid attention to what was keeping Apple afloat (Apple ][ sales) and supprted that cash cow until it finally wasn't viable. By then, 5-6 years later the Mac line was finally bringing in the money. If Jobs would have stayed it's quite possible Apple would have died. Sculley kept things running quite well it was the other CEO's that nearly ruined them.

I kow everyone wants to think Jobs was perfect but he failed at Apple, at NeXt, and at Pixar (selling hardware / software) - he got saved when their shorts and movies became huge hits. It wasnt until his return to Apple where he stuck lightning.

Anyway Sculley get too much of a bad rap. He's not histories greatest monster.
Score: 3 Votes (Like | Disagree)

IzzyJG99
I viewed the Newton as too ahead for it's time. It was a proof of concept, though. That it could be done and could have the potential to work.
Score: 3 Votes (Like | Disagree)
Read All Comments

Wednesday February 24, 2021 7:26 am PST by Hartley Charlton
Hit-and-miss leaker Jon Prosser has today alleged that the upcoming 2021 iMac models will offer five color options, mirroring the colors of the fourth-generation iPad Air, and revealed a number of additional details about the Mac Pro with Apple Silicon. In a new video on YouTube channel FrontPageTech, Prosser explained that the redesigned iMacs will come featuring options for Silver, Space ...
Read Full Article • 292 comments

Monday February 22, 2021 8:52 pm PST by Joe Rossignol
Apple plans to release two new MacBook Pro models equipped with an HDMI port and SD card reader in the second half of 2021, according to analyst Ming-Chi Kuo, who outlined his expectations in a research note obtained by MacRumors. The return of an SD card reader was first reported by Bloomberg's Mark Gurman last month. "We predict that Apple's two new MacBook Pro models in 2H21 will have...
Read Full Article • 511 comments

Tuesday February 23, 2021 7:07 am PST by Hartley Charlton
Over the past week, some M1 Mac users have been reporting alarming SSD health readings, suggesting that these devices are writing extraordinary amounts of data to their drives (via iMore). Across Twitter and the MacRumors forums, users are reporting that M1 Macs are experiencing extremely high drive writes over a short space of time. In what appear to be the most severe cases, M1 Macs are sai...
Read Full Article • 641 comments

Thursday February 25, 2021 7:48 am PST by Joe Rossignol
Apple plans to unveil new 14-inch and 16-inch MacBook Pro models with Mini-LED-backlit displays in the second half of this year, according to industry sources cited by Taiwanese supply chain publication DigiTimes. The report claims that Radiant Opto-Electronics will be the exclusive supplier of the Mini-LED backlight units, while Quanta Computer is said to be tasked with final assembly of the...
Read Full Article • 189 comments

Thursday February 25, 2021 1:50 am PST by Sami Fathi
Valve, the makers behind popular game distribution platform Steam, will be forced to hand over aggregate historical sales, price, and other information on 436 games hosted on the store to Apple, as part of the Apple vs. Epic Games antitrust case. As reported in a paywalled report by Law360, during a virtual discovery hearing on Wednesday, U.S. Magistrate Judge Thomas S. Hixson ordered that...
Read Full Article • 118 comments