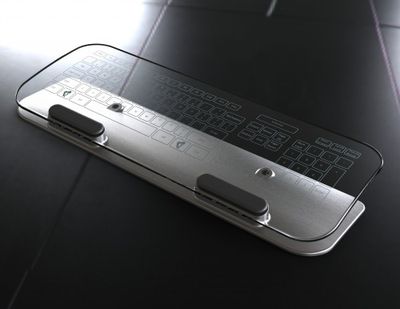 The latest cool Kickstarter project that we've run across is one by Jason Giddings who promises to build a modern multi-touch keyboard and mouse. Multi-touch keyboards have been done before, but none that we've seen in recent years since the rise in popularity of the iPhone.

This project seeks to modernize the multi-touch keyboard with an attractive glass design:

Multi-Touch keyboards and mice are the next generation in computer peripherals. These elegant well made devices are composed of quality tempered glass, a solid metal base, and the finest components. They are designed using simple existing technology and have no moving parts. They have rechargeable Lithium Polymer batteries and are completely wireless. The tactile sounds and lighting can be turned on or off per the users' preference plus they are coffee and doughnut resistant!

The software might be the most difficult part in integrating into the OS, and is planned to be released as open source in order to give tinkerers the ability to continue to tweak the experience. The cost for one of these finished keyboards will be $250 or more, with $350 to get both the keyboard and mouse. The project requires $50,000 backing total for it to go forward.
111 comments

komodrone
how the hell do you rest your fingers on this without telling it to type?
Score: 19 Votes (Like | Disagree)

mdriftmeyer
The reason the touchscreen works on the iPad is you're looking at it. I sure as heck don't want to be looking at my full length keyboard when I'm typing.
Score: 18 Votes (Like | Disagree)

OldSchoolMacGuy
No tactile feedback? No thanks. Plus who has $350 to spend on a mouse and keyboard (or rather who wants to spend that much on them).
Score: 16 Votes (Like | Disagree)

nick219
This will never work. People want to type on their computers without looking down at the keyboard. The reason multitouch keyboards work on iDevices is because the keyboard is on the screen, it is not a separate entity.
Score: 7 Votes (Like | Disagree)

Tortri
Can't see myself typing without physical feedback(try typing on a hard surface for a while and not feeling where your fingers are.. don't look down.) and unless this thing lets you change the complete layout to something else entirely different, all this is is a cool novelty/expensive keyboard.

Now if I could say program the so called keyboard to have custom designed shaped keys for different functions, that's a whole different story entirely. If this thing is like a see thru ipad screen but keyboard shaped and made of glass, I could see myself using it for different things, the functionality is limitless. But as one poster said, theres probably a keyboard app for the ipad, which is basically the same thing. Just be more useful in the shape of a keyboard I guess. Kind of like the L5 Remote App, but keyboard shaped and for computers.

After reading the FAQ on the kickstarter page no, it's just a glass keyboard. Maybe able to "Print" your own design and possibly slap it on the back some how.. but it's not what I had in mind.. I thought there were lasers that eventually showed the design of the keyboard (turned off shows nothing but glass, turned on the keys turn on and light up) which would in turn design your own design on the glass panel. Nope.. :-\

Look Mah, similar design 3 years ago!
http://www.yankodesign.com/2008/06/12/lights-camera-glassaction/
Down to the lighting and camera. Seriously seems like he stole this guys idea, redesigned it and called it his own.
Score: 6 Votes (Like | Disagree)

Joshwawilson
I prefer the standard apple keyboard where I can actually feel the button. Maybe if they kept it glass but raised the Keys up it would be effective. Either way cool idea, just questioning the practicality. (I have an iPad, but I use the Bluetooth keyboard for essays)
Score: 6 Votes (Like | Disagree)
Read All Comments