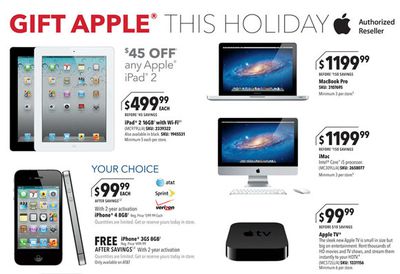 BestBuy Black Friday sales for Apple Products
Online and retail stores are already starting to promote their upcoming "Black Friday" sales. Black Friday is the day after Thanksgiving in the United States and marks the traditional start to the holiday shopping season. The day brings early store openings and deep discounts from many retailers, and ranks as one of the busiest shopping days of the year.

But FYI, as has been reported here before I believe, Amazon has had :apple:tv for $10 off for a few weeks now.

Also, every flier I've seen for MicroCenter (brick & mortar store, Columbus, OH) has had $50 off iPad 2's for a few months.


EDIT: I share some seemingly pertinent sale info... someone votes me down. People are strange. FYI: Amazon & MicroCenter are just as reputable as BB, if that's what that was about. It's not like i'm talking about some grey-market Brooklyn dealer... Just sayin'.

Double-EDIT: Hmmm.... maybe the vote-down was cuz I called the above story "interesting". If so, fair enough. :rolleyes:
Score: 7 Votes (Like | Disagree)

Last year Apple had a $41 discount for iPads, so I'll probably look into that if anything. Much easier to take a $4 loss than going to Bestbuy for a few hours.


Actually tis the season for giving.
Score: 4 Votes (Like | Disagree)

Also, they just opened a new location in the Greenwood Park Mall... looks like a cool store and great alternative to the Apple Store.
Score: 2 Votes (Like | Disagree)

Eriamjh1138@DAN
Apple saving anyone money is news. $45 to $100 is still a discount. Add what one saves in sales tax and it's enough to buy dinner for two.

The rest of the year, Apple offers nothing. So...
Score: 2 Votes (Like | Disagree)
Read All Comments