AppleCare+ Now Available for Sale Within 30 Days of iPhone Purchase

Alongside the launch of the iPhone 4S, Apple also debuted a new $99 AppleCare+ program offering an extended warranty with accidental damage coverage. The AppleCare+ package replaced the previous $69 AppleCare for iPhone offering that did not offer accidental coverage.

Some confusion about the AppleCare+ program arose in its early days, stemming in large part from Apple's requirement that the coverage be purchased at the same time as the iPhone, a requirement that seemed to conflict with the legal text of the agreement which stated that AppleCare+ must be purchased within the device's one-year standard warranty period. Regardless, a number of customers were not offered the AppleCare+ option at the time of pre-ordering, and Apple addressed the issue by offering a temporary exception to allow any early iPhone purchaser to obtain AppleCare+ through November 14th. 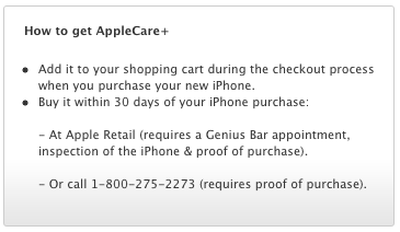 With that deadline for delays AppleCare+ purchases having now passed, Apple appeared set to revert to the original policy of requiring that the plan be purchased at the same time as the iPhone. But Apple has now updated its AppleCare+ page to indicate that users can purchase it in-person at an Apple retail store or over the phone any time within 30 days after the iPhone purchase.

How to get AppleCare+

* Add it to your shopping cart during the checkout process when you purchase your new iPhone.

Apple has also revised the AppleCare+ terms and conditions to remove the previous mention of the option to purchase any time within the one-year standard warranty period.

In addition to the new 30-day window, SprintFeed reports that it has received an internal Sprint notice indicating that the original amnesty period for early iPhone 4S purchasers has also been extended through December 15th. The wording does suggest, however, that the 30-day limit still applies to these customers, so customers who purchased the iPhone 4S on launch day would still be out of luck given that the window has now passed for them. But the policy does offer some continuing retroactive coverage for customers who purchased their devices less than 30 days ago.

I will buy it for my daughters phone but not for my wife's or mine.

I'm now self insured because my wife and I have had every iPhone that has been released and we never purchased Apple Care, mostly because we knew we would upgrade in 1 year, and that's $552 in savings.

Now that Apple Care+ covers accidental damage ($49 deductible) and Apple is not necessarily going to release a new phone ever 12 months, it makes more sense to buy the coverage.

Nonetheless, my daughter will keep her phone for at least two years so Apple Care + will be a wise move!

So you spend $99 on applecare and another 49 if you actually use it which comes to about 150 bucks. An out of warranty replacement from Apple is $199.

xxplosive1984
This whole thing is ridiculous. I should be able to purchase Applecare at anytime during the initial 1 year warranty period. I just spent $300 for the phone. Can a customer have a few months relief before having to shell out again for Applecare?
Score: 3 Votes (Like | Disagree)

azentropy
Still silly terms. You should be able to get it any time within the first year with maybe a 30 day grace period before you can use it. That would keep most people from purchasing it right after they broke it and wanting to get it fixed right away if that is their concern. Having to bring it in to be inspected? seriously?

Also have they cleared up wither water damage is covered? I would assume it was but then also see people posting on Apple's boards that they were told it was not. It is conspicuously absent from there terms. "Accidental Damage from Handling" is pretty vague.
Score: 3 Votes (Like | Disagree)

clancemasterj
I just called apple yesterday about this. I preorded my iPhone and I didn't know about the new policy. Apple said I was outside of the window but they let me get it anyway. :D
Score: 2 Votes (Like | Disagree)

If I didn't buy Apple Care+ now within the required time, I will not be able to purchase it forever? So since I am with ATT will my only option to get insurance for my iPhone 4S is with their program or others (square trade)?
Score: 2 Votes (Like | Disagree)

Drumjim85
So if you phone falls and breaks within 30 days, you can: A)have it inspected by a retail store and be denied. or. B) call apple and successfully buy Apple Care.

Doesn't seem logical that the two options are so different.
Score: 2 Votes (Like | Disagree)
Read All Comments