Patently Apple reports on a newly-published patent application from Apple describing the integration of a speaker into the clip of the iPod nano or shuffle. Apple's proposed design includes a recessed portion within the device's clip that would house a piezoelectric speaker. 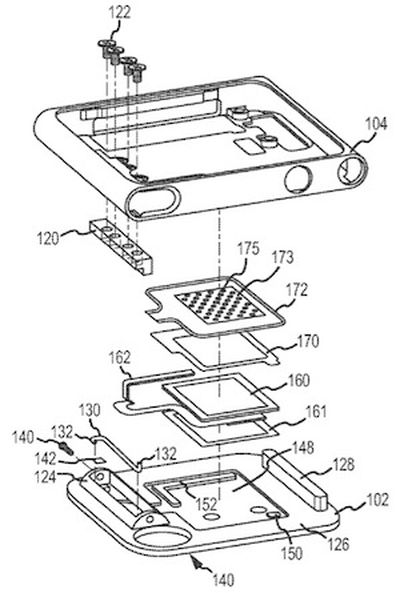 Exploded view of iPod nano or shuffle case with speaker integrated into clip
As part of the invention's description, Apple outlines how a small domed or dimpled cover over the speaker could be designed to produce specific acoustic effects, allowing for sufficient movement of air to create the required sound quality for the device.

Adding a speaker to the iPod's clip would of course mean that it would need to be electrically connected to the main portion of the device, and Apple also describes how thin, flexible wires or microstrips could be routed alongside or through the hinge block that serves as the mounting point for the clip.

Apple does not propose any specific uses for the external audio features enabled by the addition of a speaker clip, and the extremely thin nature of the speaker housing would limit the sound quality achievable through the system. At a minimum, the speaker could provide clicks and beeps as feedback for user input on the device, although more complex audio could also be generated.

Curiously, the exploded view diagram included in the patent application also shows a fairly large hole in the iPod clip, as seen at the bottom left of the diagram. While Apple does not specify the intended function of that hole, it does line up nicely with previously-leaked front and back photos potentially showing a rear-facing camera hole for the iPod nano's main body. That design has, however, yet to see a public debut.

paul4339
speaker + mic means Siri enabled.
one day you'll be able to clip it on your shirt and it'll be just like one of those star trek communicator badges
:eek:

adrian.oconnor
Please no :( It's already bad enough -- kids with speaker phones playing music as they go about their business already brings the tone down. We don't need anymore of that. Hopefully Apple will do the right/classy/tasteful thing, and just forget about it.

Edit: Yeah, almost forgot to add... get off my lawn you damned kids.
Score: 9 Votes (Like | Disagree)

Roessnakhan
How about bluetooth in the nano first, so people can use wireless headphones?
Score: 6 Votes (Like | Disagree)

TheMacBookPro
The fifth generation nano (with the video camera) already had an internal speaker, didn't it?
Score: 5 Votes (Like | Disagree)

Apple's patents aren't usually so overt, they often try to obscure the intended use of the new technology. In this case, I think we can expect the next Nano to have some type of speaker, perhaps to make it more competitive as a watch.
Score: 5 Votes (Like | Disagree)
Read All Comments