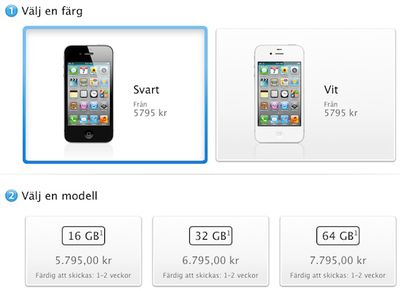 iPhone 4S order page for Apple's Swedish online store
While Apple does not offer online sales in all of the new launch countries and customers looking to purchase subsidized models on contract will not be able to purchase online, Apple is currently quoting shipping estimates of 1-2 weeks for unlocked devices in nearly all of the new markets with online stores. The lone exception is Singapore, where all iPhone 4S models are listed as currently unavailable. Demand for the iPhone 4S has been high in that country, with reports indicating that carrier partner SingTel sold out of appointment slots to purchase the device within 90 minutes of opening registration earlier this week.
Related Forum: iPhone
[ 70 comments ]

Silverfist
If you buy it in Sweden, do you have to assemble it yourself?

Here in Norway, Apple is selling (through their site) unlocked full-price iPhones. The 16 GB is 4890 NOK, about 900 dollars.

And here in Norway, the warranty is two years, but you can complain on production defects within 5 years and get free service or replacement. By law.

Yeah, I was a bit surprised two weeks ago when I called the service partner of my phone company (which I bought my 3Gs through) and told them how the data connection and GPS signal seemed to be unstable, plus a lot of dust under the glass. I thought the warranty was just Apples usual 1 year, but they told me it was 2 years. But that ended in July. But since it´s still within the 5 years, they would take it in. Sent me a pre-paid envelope, and I got a new 3Gs back in 6 days:)

I don´t like socialism (in it´s pure form, which we don´t have anyway), but I do like the fact that companies have to offer me products that work and are durable:D


...oh, by the way, there was also some court ruling in Norway saying that the providers can´t lock us into phone contracts for more than one year. For good and bad I guess. I´m happy with the prices and the service of my provider (chess.no), but I´m considering buying full price directly from Apple, because that´ll actually be cheaper in the long run (1 year).
Score: 4 Votes (Like | Disagree)

Seems to be working.


Humm, another uninformed person that thinks Socialism is horrible, and the government controls everything. Your link is just one good example of how
most people have a better quality of life in Europe. Consider that the high
vat tax pays for a lot of great programs in Sweden and here in Finland where I live. And I am an expat American so I think I can speak fairly about how the
system works vs the American system. I don't mind paying high vat so that
my kids can have a free university education or subsidized daycare or
virtually no cost universal healthcare. Should I go on.?
Score: 3 Votes (Like | Disagree)

Funny thing: US has the same debt as Greece per capita.

Exactly this - I was going to point this out, but you beat me to it. I'm another ex pat American, living in Sweden. All you weird Americans who have this stupid idea that you live in a country that somehow runs things better are completely dominated by a denial reality vortex field thousands of magnitudes of power greater than the late great Steve Jobs was ever able to conjure up.

Are you all so eager to forget the fact that if the US federal government had not raised their own lending ceiling, you'd all be sitting in far deeper s*** than even Greece is now? A move that will devalue the currency and cause more harm than good in the long run? And let's not forget that it was our own deregulation of banks and the finance industry, coupled with their greed, that sent all of us down this road of world recession in the first place.

Contrary to the popular right leaning American sentiment, the offering of free, public healthcare and welfare benefits does not equate to the non-existence of private practices or extreme waiting times for care. Private practices in fact flourish both in the Dental and Medical fields, not to mention the insurance and pension industries. Of course those who are wealthy enough use some of their money to take advantage of these things because what they offer is better than the government programs, but the fact that there are systems in place so that no citizen is left without basic necessities of human welfare is something we in the United States have never been able to claim at any point in our proud history.

It baffles me how threatened people get by this stuff simply because it is a different way of doing things - that actually accomplishes more for the society in which it operates than anything in the US. Allow yourself to open up your mind just a wee tad - you might be surprised at what you find.

Take for example income tax differences. Sweden's tax table starts at around 20% for low wage earners and goes all the way up to 58% for people making $100,000 a month or more. Plus everyone pays an average of about 22% sales tax (groceries are 6%, most everything else 25%). So the everage Joe who pays 30% income tax and 22% sales tax ends up paying in to the goverment around 50-55% of his income.

What does he get? Well, he gets a hell of a lot actually. He gets an automatic $20 co-pay medical insurance with a cap of maximum $220 total annual out of pocket cost. He gets a government funded pension from 65 years old that will pay him 65% of his ending monthly salary until the end of his days. He gets subsidized burial costs. He gets the right to take up to 270 days of parental leave at 80% of his current wage, paid by the government, plus an additional 10 days at that same rate immediately following the birth of his/her child. He gets paid a government benefit of $150 a month per child, and even more if he has more than 3. He gets subsidized daycare for about $160 a month per child. His children get free dental and orthodontic care until the age of 20, and free university tuition. He gets a guaranteed government mandated 25 days paid vacation every year.

There is more - but just take these things for a moment. How much does the average American pay out of their own paycheck every month to get these kinds of coverages and benefits, and what percentage are they then, personally deducting from their pay, in effect taxing themselves, to achieve the same result the Swedish citizen gets automatically? Go ahead, add up you monthly costs for health and dental for your family, plus your 401K, your kids braces, daycare costs, and their college funds, and add to that the lost income for anything less than 5 weeks vacation that you get as a "benefit" from your job.

Then of course the Swede also still gets to enjoy many of the same tax deductions that Americans enjoy, such as primary residence home loan insurance deductions, and commuting expenses, even payments made to pay for labor costs for housekeeping services and home renovations.

Then look at the state of Sweden. It has weathered this global financial crisis better than almost any western country. How is this? Ask their genius finance minister, Anders Borg. Look him up. He is a complete finance guru, invited by many governments, including our own, to come and give them advice, which then is not listened to, unfortunately.

The point here is that the whole idea that government run benefits programs are anti-American, anti-freedom is crap. The idea that freedom equates to the "everybody for himself" mantra is a classic divide and conquer tactic used by an elitist government to keep people selfish enough to be scared by forward thinking and smart ideas and programs such as these. They need the money to support their unnecessarily gargantuan cash cow/natural resource appropriation tool/military force anyway!
Score: 2 Votes (Like | Disagree)

Two years, not three years. Member states might have longer periods but European law requires member states to provide for at least two years of liability when goods are sold to consumers.

The industry consensus is that any such defect always shows up within six months.

That's not just "industry consensus", that's European law.
Within the first 6 months the burden of proof is reversed in favor of consumers.
I.e., the product is legally assumed to be defective from the beginning, unless the seller proves otherwise.
Score: 2 Votes (Like | Disagree)


Seems to be working.