Nearly All Apple Hardware Costs More Than the Average PC

Setting aside the claim of analysts that Apple "missed" earnings last quarter, Apple sold record numbers of Macs (4.9 million) and iPads (11.1 million). During a conference call with analysts earlier this week, Apple CEO Tim Cook was asked about "cannibalization" -- the thought that increased sales of one type of product will impact sales of another. In this case, will iPad sales negatively affect Macintosh sales?

Cook believes that the iPad is cannibalizing the PC market, and to a limited extent, the Macintosh as well. However, with both iPad and Mac breaking sales records, things are good so far as Apple is concerned.

There is no doubt that the Macintosh is a premium computer offering, with the most inexpensive full-featured Mac being the $999 11" MacBook Air (the Mac Mini does start at $599 but needs an additional keyboard, mouse and display to work). For the first three calendar quarters of 2011, the average selling price (ASP) of all Macs, both notebook and desktop, was $1297.75. This is more than double the ASP of a generic Windows PC. For that same time period, January through September of this year, the average selling price of a Windows PC at U.S. retail was $491, according to NPD's Retail Tracking Service**.

In October 2008, long before the iPad made its debut, then Apple CEO Steve Jobs said this:

There are some customers which we chose not to serve. We don’t know how to make a $500 computer that’s not a piece of junk, and our DNA will not let us ship that. But we can continue to deliver greater and greater value to those customers that we choose to serve. And there’s a lot of them. We’ve seen great success by focusing on certain segments of the market and not trying to be everything to everybody. So I think you can expect us to stick with that winning strategy and continue to try to add more and more value to those products in those customer bases we choose to serve. 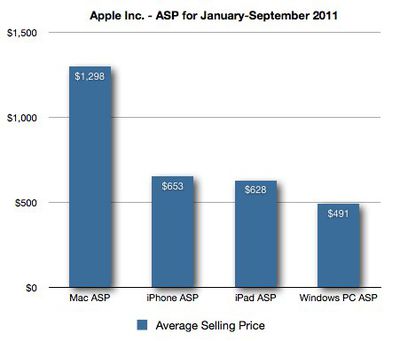 But these days, Apple does make a $500 computer -- the iPad. The least expensive iPad is $499, precisely the price point Jobs claimed Apple couldn't make a computer that wasn't "a piece of junk." In fact, the iPad ASP for the first three calendar quarters of 2011 was $628, more than $130 higher than the average Windows PC. Perhaps even more incredible is that Apple's smartphone offering, the iPhone, had an ASP of $653 over the same period.

All three of Apple's most profitable product categories -- the Mac, the iPhone, and the iPad -- have average selling prices significantly higher than a generic Windows PC.

Analysts and other computer industry watchers typically compare Apple's computer sales with Windows PC's, assuming that comparing computers-to-computers is an apples-to-apples comparison. However, given that the ASP of the typical Windows PC in the US is less than ASP of all Apple's major products, perhaps a better comparison -- from a financial perspective -- is to add the sales numbers for iPhone, iPad, and Mac together.

**The average selling price for a Windows PC sold at U.S. retail (for the first three quarters of 2011) was $491 based on NPD's Retail Tracking Service. The Apple ASPs used in this article are calculated from Apple's earnings reports, which are not broken out by country. This should be considered when comparing NPD's U.S. Retail numbers to Apple's worldwide numbers.

Naimfan
I think to claim that the iPad is a fully functioning computer is disingenuous at best.

Of course Macs are more expensive - that's not a newsflash.
Score: 28 Votes (Like | Disagree)

mbarriault
Find me a Windows computer actually comparably spec'd as the iMac.

Make sure to include


Most people doing comparisons tend to ignore these details.
Score: 18 Votes (Like | Disagree)

sasegars
I wouldn't trade my iPad, MBPro, iPhone 4s  for fourteen new PC products. Couldn't, shouldn't, wouldn't  the customer service ALONE makes the price difference worth it. I spent years working with PC's  and cannot adequately describe the unbelievable differences  in quality, in service, everything. No question: worth every penny. And more.
Score: 16 Votes (Like | Disagree)

SandynJosh
I read the article carefully and asked myself, "What's the point it's trying to make?" I read it again and, Lo! There is no point.

This isn't a rumor, it isn't news...it isn't even accurate or relevant.

Give me back the five minutes of my life!
Score: 15 Votes (Like | Disagree)

However, the graph that should supplement those above is the rate at which those $299 Windows PCs/Laptops are replaced versus an Apple Desktop/Laptop etc.

THAT'S the comparison that matters to me. 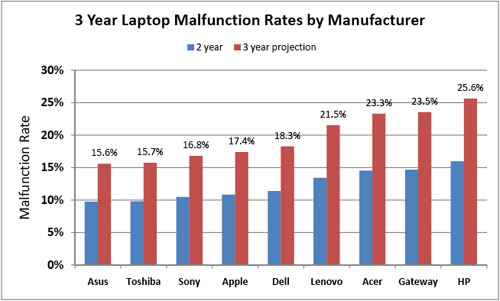 Even HP laptops had a +30% failure rate within the first year or two...lord knows what kind of failure rate the generic laptops had. Cost of ownership trumps cost of acquisition everyday.

Then why do macs look more premiums than plasticky pc?????? Obviously microsofts dessision.


Microsoft have no say in the decisions of PC Builders. They are free to build whatever they want. And why can't you understand than plastic laptops can still look and feel premium? My $1,800 Sony Vaio is made of plastic, but feels very solid and sturdy, and has a premium look and feel to it. And not all Windows PC's are plastic.
Score: 11 Votes (Like | Disagree)
Read All Comments

Thursday December 8, 2022 7:05 am PST by Joe Rossignol
iOS 16.2 is expected to be released next week following nearly two months of beta testing. With last-minute additions like Apple Music Sing and Advanced Data Protection, the software update now has over a dozen new features for the iPhone. Below, we've recapped many of the new features coming with iOS 16.2, including Apple's new whiteboard app Freeform, two new Lock Screen widgets, the...
Read Full Article • 67 comments