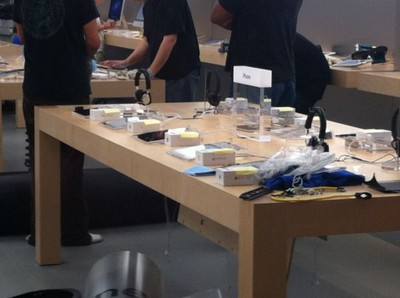 U.S. Apple Stores are pulling overnight shifts to put up new displays and promo materials for the iPhone 4S launch. @ifostore is standing in line and shot the above photo where the staff is exchanging old iPhone 4 models with the new iPhone 4S.

Meanwhile, other parts of the world have already seen the iPhone 4S launch, and to massive crowds. Smh.com.au has a running update of the launch in Australia. Even 4 hours after the launch, the line to the Sydney store was described as "appalling" going half way down King Street.

The Japanese launch was hampered by registration slowdowns from Softbank, according to the Wall Street Journal:

The launch of the iPhone 4S in Japan was interrupted when Softbank – the main service provider for Apple products in the country—suffered a server glitch that temporarily suspended sales nationwide. A company spokesman said the servers were unable to process registration information.

Analysts are predicting weekend sales to top that of the iPhone 4 which sold 1.7 million units its opening weekend. Estimates range from 2 million to as high as 4 million.

@NikkorNoct at Covent Garden, UK
In the U.S., Apple Stores will be opening at 8 a.m. local time to launch the iPhone 4S. Additionally, Verizon, AT&T, and Sprint stores will also be stocking the new device, but those retailers tend to get fewer units per store than Apple's stores. Gizmodo also notes that Radio Shack, Best Buy, Target and Sam's Club may have units, but your mileage may vary.

MacRumors forum members have been organizing meetups for the iPhone 4S launch in our dedicated forum.

All those people who don't own credit cards or have access to the internet!? What sad times we live in. ;)


No, some of us are just young and like the experience. We don't all have to put on a tie and be at work at 9am. You only live once, so why no just live it up?
Score: 18 Votes (Like | Disagree)

mickbab
I'd love to go and be first in line one day for a launch, not to be the first to buy the new device, but just to go in and look around the store. Confuse everyone!
Score: 13 Votes (Like | Disagree)

I'd love to go and be first in line one day for a launch, not to be the first to buy the new device, but just to go in and look around the store. Confuse everyone!


"What a lovely day to window shop at The Apple Store. Geez, it's crowded. I wonder why..."

Week 2: It's still a good phone, but totally not worth it to upgrade.

Week 3: Hmmm, I'm thinking about it, but man that 64GB is expensive!

Damn it looks crazy. Anybody waiting in line?


I'm waiting in line at the Irvine Spectrum in California. I have about 8 people in front of me and I got here at 7pm. It is now 12:15am and there are many many people waiting behind me with tents, tv's and xBox 360's, yes I said an xBox!

I am having a great time doing Philosophy homework and talking to fellow Apple fans!
Score: 8 Votes (Like | Disagree)

deannnnn
So glad I ordered online.
Score: 7 Votes (Like | Disagree)
Read All Comments

Monday May 10, 2021 8:11 am PDT by Joe Rossignol
Apple recently released a redesigned Siri Remote with a physical clickpad, but if you have an original Siri Remote laying around that you still plan on using, you may be interested in getting an AirTag case for the remote. Etsy user PrintSpiredDesigns has capitalized on the opportunity with a new 3D printed, made-to-order AirTag case for the original Siri Remote. The remote slides into the...
Read Full Article • 84 comments

Monday May 10, 2021 10:41 am PDT by Juli Clover
Apple's upcoming iPhone 13 models will be slightly thicker than the iPhone 12 models and will also feature larger, thicker camera bumps with lenses that protrude less, according to iPhone 13 schematics seen by MacRumors. The new iPhone 13 and 13 Pro models are expected to feature a thickness of 7.57mm, up from 7.4mm in the iPhone 12 models. That's an increase of 0.17mm, which won't be hugely ...
Read Full Article • 181 comments