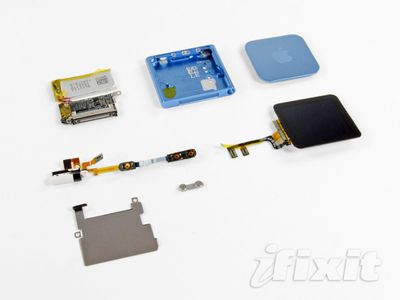 iFixit has gotten its disassembling hands on the latest iPod Nano and taken it apart piece by piece. They discovered the new 7th Generation Nano, introduced on Tuesday, is very similar to the prior version.

The most difficult part of the teardown was removing the display which "requires the use of a heat gun, as there is a lot of adhesive holding it in place." Once the display is removed, though, disassembly is pretty straightforward.

There were software changes between the old generation Nano and the new, but those changes are available to prior Nano owners via a software update. The new Nano's biggest feature is a reduced price. The 8GB version is now $129 and the 16GB model is $149, down from $149 and $179 respectively.

SwiftLives
So - is there any physical difference between the current and previous generation nanos? Is there any software difference?
Score: 5 Votes (Like | Disagree)

TuffLuffJimmy
Weren't these supposed to have a useless camera or something?
Score: 4 Votes (Like | Disagree)

So - is there any physical difference between the current and previous generation nanos? Is there any software difference?

If the answer to both of your questions was 'no', why would there even be a new generation?
Score: 4 Votes (Like | Disagree)

applefan289
All the new stuff Apple came out with 2 days ago consists of the following:

That's it. The only real update was the 4S, which I'm fine with. I've never liked the Nano, and the Touch still looks great, so I don't see a need for anything to be added, except maybe an A5 chip should have been added, but that's about it. If they added anything though, the price would have to be higher than $199.
Score: 2 Votes (Like | Disagree)

Weren't these supposed to have a useless camera or something?


you believe the garbage you read on this site?

The part numbers have not changed.
Score: 1 Votes (Like | Disagree)
Read All Comments