Investment research firm UBS today issued a report highlighting retention rates for smartphone users, judging consumer loyalty based on whether they plan to make their next purchase from the same manufacturer as their current handset. According to the worldwide survey, 89% of iPhone users report that they will purchase another iPhone. 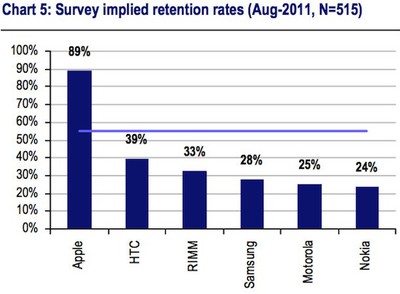 No other manufacturer topped a 40% retention rate in the survey, with HTC taking second place at 40%. Android as a whole has a planned retention rate of about 55% according to the survey, indicating that while many current users of Android handsets are planning to switch manufacturers, a fair number of them do intend to stay with Android. But 31% of surveyed Android users report intending to switch to the iPhone for their next device, with over 50% of the total "switchers" planning to move to Apple from another manufacturer as only about 10% of switchers are moving away from Apple.

Research in Motion has experienced a steep drop in retention rate, with only 33% of current BlackBerry users planning to purchase another BlackBerry, down from 62% a year and a half ago. In contrast, Apple's retention has fallen only 6 percentage points over that time in the face of strong competition from Android.

KnightWRX
That's one advantage to Android. You can change manufacturers for your phone and retain your investment in the eco-system without much issue. Moving from the hot Samsung, HTC, Motorola or Sony model to the new hot model of the week does not make you lose all your apps. Not so for iOS.

I'll be replacing my iPhone 3GS with another iPhone just for this reason. I'd probably have moved on to Android or to another vendor (SAMOLED+ screen is quite tempting, those things are awesome!) if it weren't for this issue.

So in a sense, this high loyalty is probably a result (for some, not everybody of course!) of vendor lock-in.
Score: 6 Votes (Like | Disagree)

hcho3
Surprised that others suck so much.... but I am not surprised by results.

Apple has apple store with some brilliant customer service to back their devices up.

If I ever have problem with Samsung or HTC phone, then what do I have to do?

Contact carriers and they say go to manufacturers. You have to ship the phone out and call.... blah blah blah.

Samsung promised Froyo 2.2 release on my friend's captivate for September 2010 and it was never released until mid 2011. Once you buy their products, they don't even bother to help you.

I will stick with apple iPhone and iPad as long as apple provides excellent customer service with great apps.

Nothing can come close to apple's customer service at this point. Thanks to mighty Jobs.
Score: 5 Votes (Like | Disagree)

That iPhone users are loyal comes as no surprise. That's what happens when you look after your customers.

What is surprising is the catastrophic results for Nokia (second chart). It was obvious they would lose out significantly to Apple et. al., but to this extent?

I'm about to be one of their lost customers. I've been a fan of Nokia since digital mobiles came to market around 16 years ago - almost all of my phones have been Nokias.

So why am I switching? 1) Nokia phones no longer sync with OSX Lion. True this is primarily Apple's fault and I really do resent Apple "manipulating" me in this underhand way. But Nokia have had years to develop a user-friendly interface to OSX and they haven't bothered (their Windows interface is pretty sh**** too). That is NOT looking after your customers. And 2) Nokia have got into bed with Microsoft. Sorry, Nokia, there is no way on this earth that I'm moving to Microsoft! That is certainly not looking after your customers!
Score: 4 Votes (Like | Disagree)

rockrigo
didn't people say MS should give up on consoles after the 1st Xbox?
Score: 4 Votes (Like | Disagree)
Read All Comments

Thursday May 13, 2021 12:10 am PDT by Sami Fathi
Apple has fired Antonio García Martínez, an ex-Facebook product manager and author of the controversial book "Chaos Monkeys," following public and internal calls for removal and investigation due to past misogynistic statements, The Verge reports. Apple hired Martínez earlier this week to join its ads team, however, comments that Martínez made in the past sparked condemnation from users...
Read Full Article • 315 comments