Late last month, we reported on photos of what appeared to be the logic board for the iPhone 4S or 5, showing a form factor for the board more similar in appearance to the CDMA iPhone 4 than the GSM iPhone 4, as well as space for Apple's rectangular A5 system-on-a-chip. 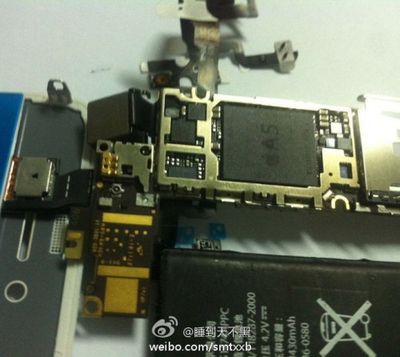 phoneArena.com now points to a new image that has surfaced on Chinese microblogging site Weibo appearing to show that same logic board with all chips in place and at least partially assembled. A connection to what appears to be a white iPhone 4-like front panel/LCD display is visible, as are a battery and several other flex cables from the device.

The image clearly shows an A5 chip, which is of course expected for the iPhone 5. There has been some debate, however, about whether Apple will be introducing an iPhone 4-like model that has been unofficially dubbed the iPhone 4S, a redesigned iPhone 5, or both. If Apple does indeed release both an iPhone 4S and an iPhone 5, an A5 chip in the lower-level iPhone 4S would be a significant inclusion given that Apple has typically chosen to offer versions of its previous-generation models and technologies as its entry-level devices.

The battery included in the leaked photo is also generating some conversation, as it appears to be the same model number is seen in previous photos, but carries slightly different specs. Earlier photos had shown the battery offering 3.7 V and 5.3 Whr, for a charge capacity of about 1430 mAh. For comparison, the current iPhone 4 battery checks in at 3.7 V and 5.25 Whr, offering 1420 mAh of charge.

This new photo appears to have the charge of 1430 mAh stamped directly on it, but curiously seems to list the voltage at 4.2 V. It is unclear exactly why the battery seems to be reporting a different voltage, and thus a different energy close to 6 Whr to reach the same 1430 mAh charge seen in earlier photos of the same part.

HarryKeogh
What an ugly phone. Too industrial-looking. Someone bring Steve back.
Score: 18 Votes (Like | Disagree)

Cod3rror
I imagine there will be a lot of disappointed people if iPhone 4S is THE iPhone for 2011.

Personally though, I wouldn't really mind an iPhone 4 shape for another year, it's really a fantastic design.
Score: 16 Votes (Like | Disagree)

trudderham
Hmm, I overlayed the outline of the iPhone 4 over this image. Looks like the screen is higher and wider: 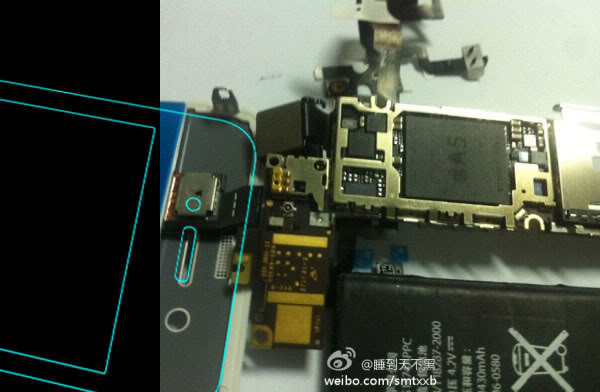 Interesting how smaller the bezel is, especially at the top.
Score: 15 Votes (Like | Disagree)

SirOmega
A change from 3.7V to 4.2V would probably indicate a change of chemistry. Different Li-ion chemistries have different nominal voltages. That said, 6Wh is pretty beefy for a cell phone battery. Makes you wonder if they're going to go LTE and the larger battery is there to compensate for any additional battery drain.
Score: 7 Votes (Like | Disagree)

"Stupidly upgraded"? Question, did you buy both the 3G and the 3GS?

The vast majority of people around the world that rely on carrier subsidies (let alone the ones that actually pay directly) are on a 2 year or more upgrade cycle. Why would they bring out a completely new case design every year?

Also: Really? A new case design is the one thing that can push you into an early upgrade? Funny, I used to think the naysayers were wrong about Apple fanboys only being in it for the looks & social status.


I have absolutely no idea why people use the 3G - 3GS example to compare this situation to. The 3G was the AIDS of iPhones. It was pretty much a redesigned original iPhone. If Hitler was alive, and I was his captor and he wanted to make a phone call, I wouldn't even allow HIM to use that piece of garbage.

The 3GS was better in literally EVERY WAY, and it needed to be. It was finally fast, it had voice control features, better battery life, more oil resistant screen, better camera, compass (which changed the way that maps worked, which was awesome), etc...so many awesome upgrades.

If the 4S is all we're getting, we are getting an upgraded processor and a better camera. The problem is that at this point, neither of those things matter anymore. The camera on the 4 is perfect. It takes awesome shots, and the resolution isn't so high that every shot takes up half of the memory in the phone. The speed can EASILY handle iOS5...the 3GS can even handle iOS5 perfectly well.

That is why a 4S is a horrible idea. It offers absolutely nothing to people using the iPhone 4 (who at this point are DEFINITELY available for an EARLY UPGRADE at least, and a lot are, like me, available for a FULL UPGRADE), which means that anybody with a version of the iPhone before the 4, really doesn't have any reason to upgrade to anything but the 4.

It IS stupid for Apple to do a 4S. If they do, like me, thousands of customers will tell Apple to smoke them and Apple will lose out on millions of dollars in revenue.
Score: 6 Votes (Like | Disagree)
Read All Comments