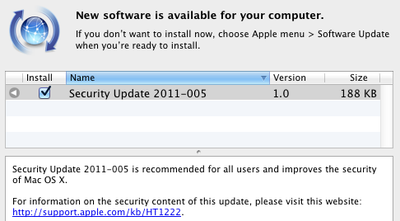 Impact: An attacker with a privileged network position may intercept user credentials or other sensitive information

DigiNotar's servers were compromised several weeks ago, with hackers obtaining access to hundreds of certificates. Apple has been criticized for being slow to respond to the issue, but is now doing so today by revoking DigiNotar's status as a trusted source.

DigiNotar, one of hundreds of firms authorized to issue digital certificates that authenticate a website's identity, admitted on Aug. 30 that its servers were compromised weeks earlier. A report made public Monday said that hackers had acquired 531 certificates, including many used by the Dutch government, and that DigiNotar was unaware of the intrusion for weeks.

They didn't start working on this yesterday, maybe they caught something in Q&A that delayed things a bit.

There is simply no excuse for Apple taking almost two weeks longer than Microsoft to release this update - with Microsoft having to cover way more OS releases and update/service pack configurations than Apple.
Score: 6 Votes (Like | Disagree)

brdeveloper
Apple is not ready to have its OSX as popular as Microsoft Windows.
Score: 4 Votes (Like | Disagree)

Rocketman
Something this serious should see updates to Leopard and Tiger as well since some in-service computers require older OS's.
Score: 4 Votes (Like | Disagree)

[SIZE=1]I even use Safari in parallels


Really? I mean, I can buy it for OS X, but Safari for Windows genuinely sucks as a browser. I prefer even IE to the Windows version of Safari. In fact, IE9 is a pretty good browser. When none of us were looking, IE went and grew up.
Score: 3 Votes (Like | Disagree)

doboy
Now we just need the update for Safari on iOS devices :D
Score: 3 Votes (Like | Disagree)
Read All Comments