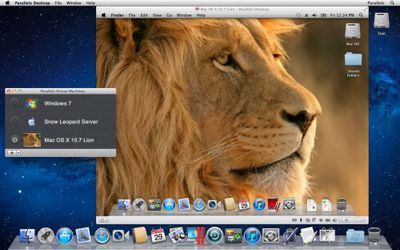 Running Windows 7 and OS X Lion
Parallels has announced version 7 of their popular virtualization software that allows Mac users to run Windows on their machines alongside Mac OS X. The new version is said to include 90 new features and enhancements including:

- Lion integration and support, including Launchpad and Mission Control for Windows programs
- Shared iSight and FaceTime HD cameras in both Windows and Mac
- Up to 1GB of video memory, for ultra-high resolutions
- Improved graphics performance, up to 45% faster 3D
- 60% faster resuming Windows
- Windows on Demand - purchase and automatically install Windows on your Mac from Parallels Desktop 7 in the U.S.

Parallels 7 supports running OS X Lion as a "guest" operating system under virtualization, meaning you can run a completely separate copy of Lion within your main copy of Lion. In July, we reported that Apple had changed the license agreement in OS X Lion that allowed users to run up to 2 additional copies of Lion on a single machine without the need for extra licenses.

iOS app on iPad
Parallels also released a update to their Universal iOS app that allows you to control your Mac, virtual machines, and all their applications.

duffy666
Yo dawg, I herd you like Os X Lion, so I put a Parallels in your Os X Lion so you can use Os X Lion while you are using Os X Lion.
Score: 13 Votes (Like | Disagree)

Feek
I like Parallels and I've been a [registered] user for quite a few versions now but I don't really like their pricing upgrade structure.

It's also frustrating because I know that I could buy this upgrade and then in a few months time it'll be included in one of the bundles, probably for less than I have to pay for the upgrade :(

I know I'm not being forced to buy the upgrade as Parallels 6 works perfectly well and this time I may just wait for whatever bundle it is this time to come along.
Score: 9 Votes (Like | Disagree)


No, but the memory manufactures would really love you...
Score: 7 Votes (Like | Disagree)