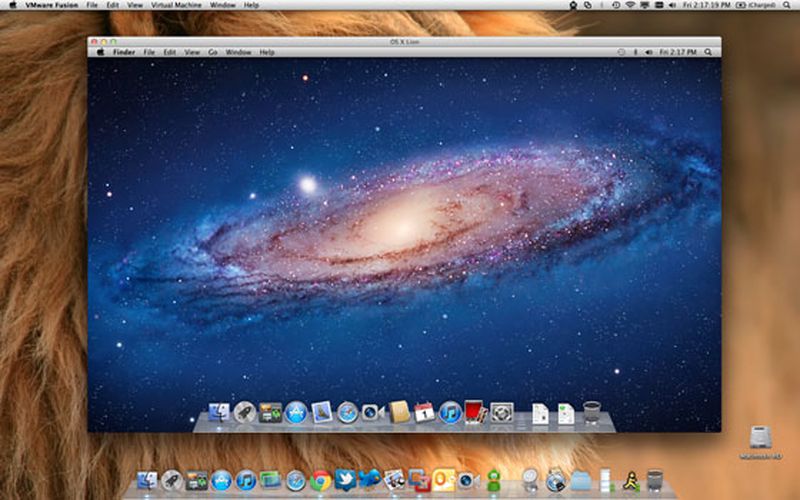 For the first time, Apple is allowing owners of OS X (client version) to run multiple virtual copies on the same machine. Previously, Apple extended this ability to Mac OS X Server only. Running separate instances of Mac OS X should be possible under virtualization solutions such as VMware Fusion and Parallels. This functionality allows you to deploy different sandboxed installations of OS X, typically for enterprise purposes. As reported in 2007, Apple first extended this capability in Mac OS X Server 10.5:

[The 2007 Mac OS X 10.5 Server EULA] permits OS X Server to run in a virtual machine (VM) as long as each VM is stocked with a different license and the physical system is Apple-made. The new rules don't apply to the client edition of Apple's operating system, which is still barred from being virtualized.

The Golden Master version of OS X Lion (10.7) just released to developers includes the final end-user licensing agreement (EULA) which reveals that users can run up to two additional instances of OS X Lion on their same machine without a need for extra licenses. From the 10.7 EULA:

(iii) to install, use and run up to two (2) additional copies or instances of the Apple Software within virtual operating system environments on each Mac Computer you own or control that is already running the Apple Software.

The shift in policy likely reflects the blurred distinction between OS X Server and OS X Client starting with Lion. OS X Server will be sold as an App Store add-on pack for OS X Lion.

lakshwadeep
Yo dawg! I herd you like macs, so we put a mac in your mac
-xzibit
Rating: 17 Votes

I don't understand why they just wont make a Mac version of EasyWorship. It feels like every time I am at church they have to reboot their computers due to that app.


All it takes is prayer and faith like every advance and gift in our lives. If we all close our eyes and think it, then the lines of codes will cometh together.
Rating: 12 Votes

lhotka
But can we run virtualized 10.6, so that we have backward compatibility for old apps.
Rating: 11 Votes

phalseHUD
At least I know all about worship software now...
Rating: 10 Votes

Can some one please tell me the point/use of this feature:confused: (I probably sound very blond asking this)

for many casual user its not needed and only fancy; not sure if I will use it regularly but for sure will give it a try.
Rating: 10 Votes

Why in the world would you still be using EasyWorship when you have a mac and can run ProPresenter?

If you are running Lion Client, does the EULA allow you to virtualize Snow Leopard Client, or just Lion Client/Server?
Rating: 7 Votes

Officially, with Lion requiring the MAS to download and the installer needing to run from Snow Leopard...

How exactly are we to install Lion in a virtual machine again ?

Xenc
So you can Mac while you Mac.
Rating: 6 Votes