Yesterday, we reported that the developer beta of Apple's iTunes Match appeared to show options for both streaming and downloading content from the cloud to a user's device. But some questions have arisen about just how the service functions, as a new report from AllThingsD shares word from an Apple spokesperson that the service is not actually a streaming one.

While a video making the rounds today makes it seem as if Apple’s upcoming iTunes Match service will stream music from Apple’s servers to a user’s device, that’s not the case. An Apple spokesperson confirms that any music you want to access from your cloud-based “locker” will still need to be stored on your iPad, or iPhone, or whatever device you’re using to listen to the song.

The difference appears to be one of semantics, however, with Apple's claims of the service requiring tracks to be downloaded actually related to local caching of streamed tracks. 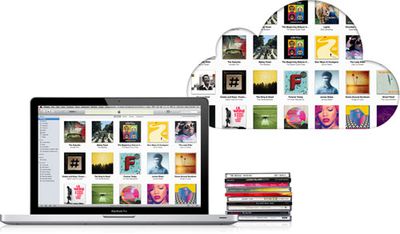 Traditional streaming services maintain constant connections, buffering only a small amount of the currently-playing track at any given time. Apple's streaming solution appears to download each track in its entirety once streaming begins. Upon tapping on the track to begin playing without initiating the full iCloud download process, the track begins playing immediately just as with other streaming services. But in reality, the full track appears to be downloaded to a local cache on the user's device, allowing for fast access to any portion of the track.

Once the track has been fully played, it remains available in that cache and can be re-accessed without needing to re-stream, but it is not considered permanently downloaded and is not counted as being in the device's music library. A video from Jeff of iDownloadBlog demonstrates a streamed track being replayed after the device is put into Airplane Mode.


As shown in the video, switching away from the cached track while in Airplane Mode appears to empty the cache, and the device is unable to replay the track if the user returns to it.

The result is a service that acts just like a traditional streaming service, but one which may provide a better experience for users, especially in areas of unstable network coverage for those on the go. As noted by AllThingsD, the reason for Apple's implementation appears to not be due to any lack of a license for full-fledged streaming.

Instead, says music executive X, this is a philosophical/design issue on Apple’s part.

Part of it is that Apple doesn’t trust the current telecom ecosystem to handle on-demand streaming of library files every time someone wants to use them — look how much trouble AT&T has had with the iPhone to date. But the other part is that Apple wants its users to think of entertainment as something they consume on Apple device — as opposed to the Google and Amazon approach, which lets consumers grab anything they want on any device with a browser.

Apple has officially remained vague about just how the service works, but it certainly appears that the company has employed a streaming service with expanded caching capabilities allowing for storage of an entire track. Users also have the option to download tracks directly by tapping on the iCloud icon associated with each track.

Thanks to @insanely_great for assistance and clarification.

Update: This YouTube video walks through the streaming vs not streaming debate.

longofest
Apple is probably denying it because true streaming probably requires some sort of additional royalties from the music industry.

I like Apple's solution from both a technical and user experience point of view.
Score: 20 Votes (Like | Disagree)

ksgant
this is more I think of Apple's way of saying it's streaming...but not really.

"Oh, it's not streaming, it's simply downloading the track from your iCloud...but you can play the track as it's streaming...I mean...downloading. Wink wink". ;)
Score: 7 Votes (Like | Disagree)

fredfnord
Three kinds of people in the world

Speaking as someone who has done audio engineering work, both on location and in a studio, I always love listening to the audiophiles. It's endlessly amusing. I'm really looking forward to my next project, which should let me do some serious trolling.

I'll try to remember to report back on how good they are at telling the difference between two identical files with different names, solely by ear. (For example, one named 'uncompressed' or 'lossless'.)
Score: 6 Votes (Like | Disagree)

You know, you're wrong. Lossless audio is the only kind of audio thats interesting to me, when it comes to my personal collection. I tolerate other bit rates, but not for music I truly care about.

Live performances should never be listened to in anything other than lossless, or you're simply listening to a bunch of noise.


Good... you've ripped all your CDs to lossless and you enjoy them.

Most people don't. And those 15 Billion iTunes purchases and the average person's ripped CDs are not lossless either.

The iTunes Music Store or iTunes Match don't do lossless.

This is clearly not the service for you.

that's exactly my point, according to apple u just download the song again, so if your iPhone is already full u can't even "stream" "cloud" or whatever they call it . their whole music match in the cloud thing is basically just letting u play/redownload everything that u already have again from the iTunes store without having to pay for it again. they basically just replace the "buy" button on the iTunes app with a "cloud" button for redownloading for free on stuff u apparently "own" from whatever original source


Leave a measly 50 MB free on your iPhone. Now you can get all the music you want.

You seem to think accessing your whole library from anywhere is nothing notable. Well, that's what iTunes Match is, like it or lump it.
Score: 6 Votes (Like | Disagree)

True streaming breaks the file up into smaller pieces and only caches portions after where you start playing. If you could start in the middle of the song, the beginning of the song would not exist in the cache. The music app doesn't appear to allow that though, and given the nature of mobile connections, it's probably for the better. This still feels and behaves very similar to real streaming, but Apple is correct to point out that it is not actually streaming.


If that's the case, then Apple TV isn't streaming either, and Apple calls that streaming.