'iTunes Match' Allows Both Streaming and Downloading of Music

Apple released a developer beta of the iTunes Match system this evening. The system is described by Apple as follows:

iTunes Match stores your complete music library in iCloud, allowing you to enjoy your collection anywhere, anytime, on any iPhone, iPad, iPod touch, or computer.

Insanely Great Mac provides this nice walkthrough video which shows you how the service works. It also shows that this is both a streaming and downloading service.


For the $25 yearly fee, iTunes Match will scan your existing iTunes music library and allow you to access it from any of your iTunes-linked Macs or iOS devices. Songs that already exist in Apple's iTunes music store will be streamed straight from Apple's master copy (at 256kbps bitrate) without a need to upload the songs yourself. Songs that don't exist in iTunes will be uploaded to iCloud. Either way, all your music (up to 25,000 songs) will be accessible from your various computers and iOS devices. 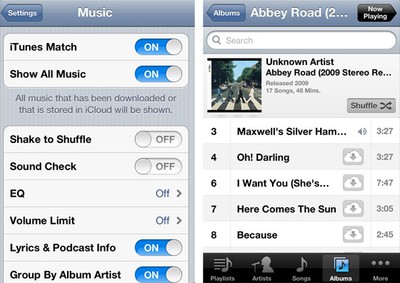 iOS 5 Music App streaming a song. iCloud button allows you to download locally.
What wasn't clear before is the fact that music can be either streamed or downloaded locally to any of your computers or devices. While the video only shows the service on a Mac, we've confirmed it works the same way on iOS devices. So, essentially, you will have instant access to your entire music library from all of your Macs, iPhones, iPads, or iPod touches for only $25/year. This ability on your iOS devices means your music library won't need to take up valuable space on the device itself, as long as you have some sort of internet connection.

iTunes Match is expected to launch alongside iOS 5 this fall.

Update: Insanely Great Mac has now posted a video showing how it works on an iOS device:

will you be able to stream your music to an iOS device?


Yes. it's mentioned in the article multiple times.

Cheerwino
This $25 is burning a hole in my pocket! Apple, I need to give it to you NOW!
Score: 10 Votes (Like | Disagree)

blybug
What the little demo didn't show is what exactly happens with that file he downloaded. Is it accessible in the Finder to be "kept forever" or has the computer truly become just another iOS-style "device" where the underlying file system is not really accessible, and the downloaded track is only visible or able to manipulated from within iTunes? Is the iTunes Library now like the iPhoto Library?

Personally I don't care, but there were some heated arguments a while back (https://forums.macrumors.com/showthread.php?t=1171764) about whether iTunes Match would be purely streaming or would actually let customers "keep" all the 256kbps files they could possibly download/hoard, essentially making it an all-you-can-eat buffet for a one-time $25 fee. Looks like the streaming is clearly in place, but whether or not downloading means "for keeps" remains to be seen. My prediction: no.

Also curious if the latest iTunes will close the CD-burning loophole. Apple's deal with the record companies on this is suddenly believable if all the tracks are "trapped" inside of iTunes on the various devices, including computers.
Score: 9 Votes (Like | Disagree)

Unless I am misreading, something doesn't sounds quite right here

Yes, you're paying the general license fee. I'm sure the thought is better to have everyone paying $25 a year (in addition to everything they purchase legally) than just have you torrenting music and the record companies making nothing. You'll still be a douche, but at least they're getting something for it. :)

With streaming being an option, this service is going to flat out dominate.
Score: 7 Votes (Like | Disagree)

DJHonda84
Apple better not use this as an excuse to drop the iPod classic. Streaming will not be a suitable replacement to massive local storage until a 24/7 network connection can be assumed, and the carriers stop their assault on heavy users.
Score: 7 Votes (Like | Disagree)


That's like comparing apples and oranges. With Spotify, you're paying to have unlimited access to their entire streaming library. With iTunes Match, you have to pay for the music you want to listen to on a per song or per album basis. iTunes Match only gives you the ability to sync your music between devices, have unlimited access to previous purchases, and get online access to songs you already owned/illegally downloaded.

Will this work over your Wireless Carrier 3G or Edge connection?


Probably only if you jailbreak.