Thursday August 25, 2011 9:58 pm PDT by Eric Slivka
In an article on some of the challenges facing Tim Cook as he steps into his new role as CEO at Apple, The Wall Street Journal briefly notes that Apple is in the process of developing "new technology to deliver video to televisions". The article does not elaborate on what that technology might be, but revives rumors that Apple is seeking to launch a subscription package for television content.

An immediate challenge for Mr. Cook will be to advance Apple's plans in what is expected to be a key market for growth: digital video. Apple is working on new technology to deliver video to televisions, and has been discussing whether to try to launch a subscription TV service, according to people familiar with the matter. Unlike the iPod and music, where Apple has a commanding position, the battle to rule online video remains wide open and the company faces fierce competition.

Apple has of course been pushing its AirPlay technology for streaming video from iOS devices to its Apple TV set-top box, but the report's context suggests that the technology being referred to is separate from that effort. 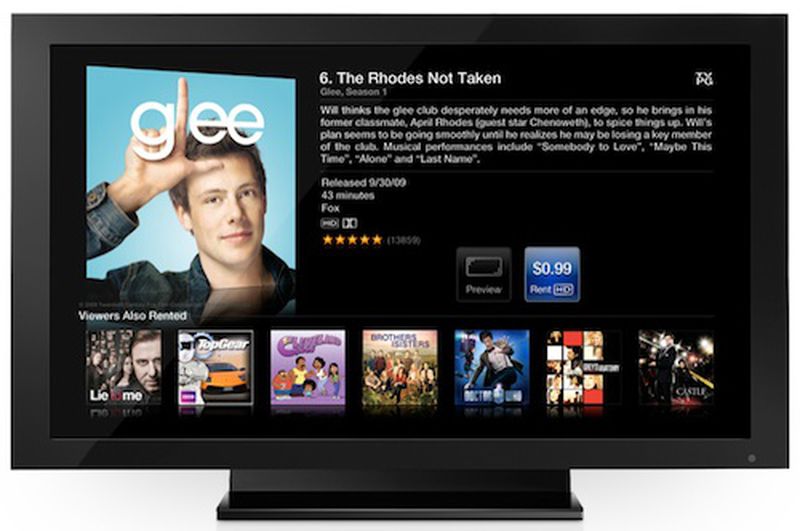 Apple has been rumored to be interested in launching an Apple-branded television set, although many of the rumors appear to fall into the category of speculation and wishful thinking. Apple has been very careful about entering the television market, limiting itself primarily to select content offered the iTunes Store and hardware such as the Apple TV for streaming within the Apple ecosystem. The company has expressed concern over the difficult go-to-market strategy for any television offerings, citing the competitive, low-margin market for television sets and the balkanized content arrangements among media and cable companies.

Rumors of a potential "best of television" subscription package surfaced in late 2009, with Disney and CBS said to have been interested in signing on to the service. By the time the iPad launched in early 2010, those plans had apparently been put on hold due to a lack of interest from media companies.

When i can use AirPlay to stream content from my Mac as well as my iOS stuff i'll be more interested.

When i can use AirPlay to stream content from my Mac as well as my iOS stuff i'll be more interested.


You can...
I do it daily. I wouldn't have even bought an apple tv if i couldn't do that.
Rating: 7 Votes

Late to the party, eh?


I guess after reading our replies he'll be more interested.
Rating: 4 Votes

That's a big assumption: That iPad will continue to dominate.

Perhaps smarter consumers will start buying tablets that cost less, deliver all web content to their users, and come with a Blu-Ray drive. Survival of the smartest vs. survival of the prettiest.


You forgot something, so I provided a suggested edit. Cheers.


How is that possible when Flash sucks on Android?

Perhaps he's referring to the runaway success of the HP TouchPad.
Rating: 3 Votes

No Apple Television. No need.


Interesting. Because "wants" tend to drive the industry as much as "needs." And Apple really understands wants.

Now look where we are.

If Apple plans to enter the TV/Video biz, count on a more than even chance of them redefining the entire market. It's what Apple does with their major projects.
Rating: 3 Votes

xbjllb
There you go again...

Let me guess. Black and white, broadcast through the air, and you watch it on these new-fangled things called cathode ray tubes...

...attached to wristwatch bands. And sued by Dick Tracy.

PeterQVenkman
I don't think they'll focus much on video. According to Tim Cook's recent announcement, the future of Apple is printers.

gugy
No Apple Television. No need.

What is interesting is if Apple has any chance to overcome the TV cable and satellites companies. That would be awesome. I just don't see it happening anytime soon. I would love to pay a la carte and just get the channels I want and a DVR to record it/or all show on demand. Oh boy, seems like daydreaming. :rolleyes:
Rating: 3 Votes

That's a big assumption: That iPad will continue to dominate.

Uhhh.......the iPad competitors are still flummoxed - going on two years now. The iPad is to tablets what the iPod was to music players. The iPad's competition is on the same threat level as the Zune was to the iPod - ZERO.

Perhaps smarter consumers will start buying tablets that cost less and DO deliver all web content to their users.

How is that possible when Flash sucks on Android?

I've been singing praise for RedRay for what seems forever. :D


Epic-X is out next week so maybe we'll see more about it soon. If they're truly achieving what they say they are (visually lossless 4k video at 10mb/s), then it's going to turn things upside down.

Would love to see what a format like RedRay could do for web video. My big dream is that Red will open a subset of RedRay for html 5 web delivery. But that's a big jump from their cinema ambitions.
Rating: 2 Votes