While Apple has been engaged in a number of high-profile patent lawsuits with its competitors offering Android-based hardware, one of the quieter disputes has gained new attention today following a discovery by FOSS Patents that Apple has in fact sued Motorola in Europe, claiming that the Motorola Xoom tablet infringes upon the design of Apple's products. The revelation comes in a court document filed in Germany and associated with the preliminary injunction granted against Samsung yesterday barring sale of the Galaxy Tab 10.1.

Prior to or simultaneously with the motion for a preliminary injunction against Samsung, Apple also filed a complaint with the same court over the design of the Motorola Xoom tablet. Here's a passage from the Samsung complaint that mentions two other lawsuits Apple instigated against iPad competitors -- Motorola and a local German company named JAY-tech...

The document does not state whether Apple has pushed for a preliminary injunction against the sale of the Xoom in the European Union as it did for the Galaxy Tab 10.1, but Apple is presumably seeking a more permanent injunction against Motorola's tablet offering.

Apple also notes in its filing that a preliminary injunction against JAY-tech was granted and further upheld "in its entirety" following a hearing. Apple does not specify exactly what model of tablet from JAY-tech was the subject of the injunction, but JAY-tech last year began offering a budget 7-inch Android-based tablet, and the company no longer appears to be selling that product.

Motorola fired the first shot against Apple last October, claiming infringement of a series of 18 Motorola patents by a broad array of Apple's Mac and iOS products. Apple responded a few weeks later with a lawsuit focused on multi-touch functionality and targeting Motorola's Droid and other smartphones.

Things have generally been quiet between Apple and Motorola since the initial filings last year, but today's revelation makes clear that Apple has continued to press its case and gone on the offensive against not only Motorola's smartphones but also its tablets.

grmatt
I don't think the Xoom looks all that much like iOS, but that Jay Tech crap is a straight rip off. Look at the dock!
Score: 23 Votes (Like | Disagree)

johncarync
Before and After iPad 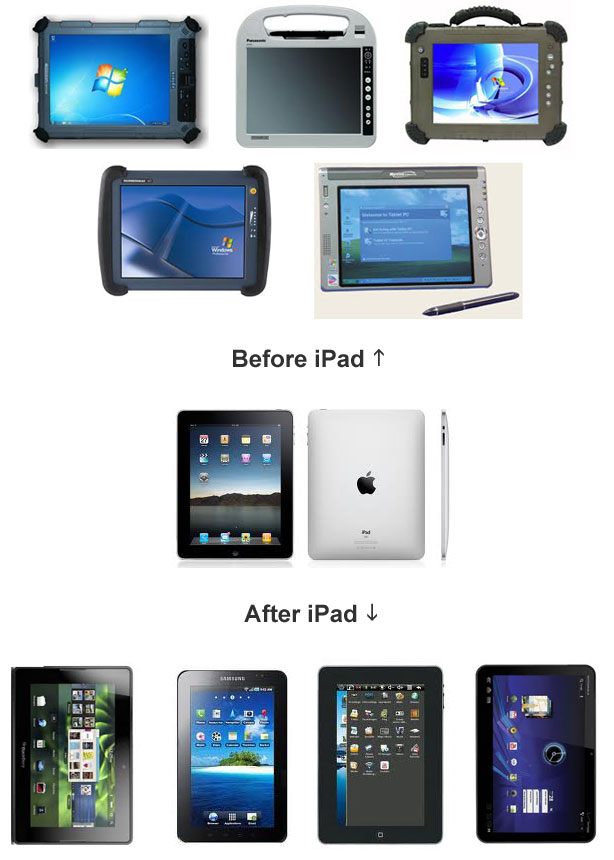 Mjmar
Is Apple going to sue everyone who makes a tablet that's a rectangle?

Wait nvm, after looking at the pics again that jay-tech company totes deserves to be sued.
Score: 15 Votes (Like | Disagree)

ssk2
Anyone else notice that since MacRumors started posting these patent disputes as front page news that:

3) people simply don't understand either the complex nature of patent litigation, or believe they know it all. This leads to people thinking one side has 'won', when in reality, both sides will settle and continue their commercial relationships.

I believe we need a 'page 2' for this type of news, where interested parties can head. Right now, our community can look a tad ridiculous arguing over complex patent disputes as if we have the inside scoop.
Score: 10 Votes (Like | Disagree)

Everyone is suing everyone else for patent infringement. Why don't they mutually agree to either open all the patents--thus paving the way for true innovation and exciting new products, or just pay each other royalties? It will probably all come out even in the end.


Because it won't encourage innovation. Why would Apple continue to innovate if other companies are allowed to sit back and copy what Apple did attempting to reap the benefit of the time and money Apple put into R&D?
Score: 10 Votes (Like | Disagree)


If it wasn't for Apple there wouldn't be a Xoom...
Score: 8 Votes (Like | Disagree)
Read All Comments

Friday April 9, 2021 2:22 am PDT by Tim Hardwick
It's no secret that Apple sees iMessage as a big enough selling point to keep the service exclusive to Apple devices, however new court filings submitted by Epic Games in its ongoing lawsuit with the company reveal just how Apple executives have rationalized their decision not to develop a version of iMessage for Android. Apple clearly recognizes the power that iMessage has to keep users...
Read Full Article • 332 comments

Friday April 9, 2021 12:52 am PDT by Sami Fathi
The two premium "Pro" models of the upcoming iPhone 13 lineup will be equipped with a low-power LTPO display, enabling the iPhones to have a 120Hz refresh rate, according to industry sources cited by Taiwanese publication DigiTimes. According to today's paywalled report, Apple suppliers Samsung and LG Display are in the process of converting parts of their production capacity to produce LTPO ...
Read Full Article • 67 comments

Friday April 9, 2021 4:58 am PDT by Sami Fathi
According to market data compiled by Counterpoint Research, Apple's smallest iPhone since the 2016 iPhone SE, the iPhone 12 mini, struggled to obtain a spot in the top five list of best-selling smartphones in January of this year. According to the market data, the iPhone 12 mini came in eighth place for the best-selling smartphone worldwide in the first month of the year. However, the iPhone ...
Read Full Article • 249 comments