Apple Briefly the Most Valuable Company in the World [Updated]

Apple, Inc. was, several times today, the most valuable public company in the world as measured by market capitalization. Apple's market cap briefly passed ExxonMobil today, just after 1PM, reaching $341.55 billion in valuation. ExxonMobil was valued at $341.42 billion. Both stocks fluctuated throughout the day, but ExxonMobil closed the day at a higher valuation. 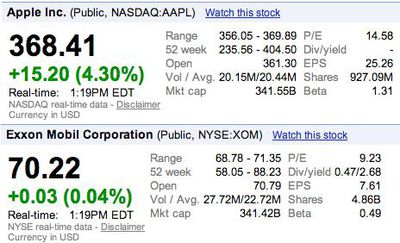 Apple didn't pass ExxonMobil by rocketing up in price, however. It merely hasn't fallen as far during the current market downturn. Both AAPL and XOM are significantly off their highs as the overall markets have dropped over the past couple weeks.

Five-year comparison of Apple and Exxon Mobil market capitalizations (Source: YCharts)
Today, Apple is having a strong day, up more than 4%, while Exxon is near flat.

Update: While Apple dropped back a bit after its initial move past ExxonMobil and quickly relinquished the lead, ExxonMobil has pulled back more than Apple has over the past few hours, and Apple now holds a market cap lead of $4-5 billion.

So, what next Stevie? World domination?
Score: 17 Votes (Like | Disagree)

macduke
Should have taken Michael Dell's advice in 1997:

"What would I do? I'd shut it down and give the money back to the shareholders," Michael Dell said before a crowd of several thousand IT executives.

troop231
Congrats Apple! Who would've thought this in the Sculley era?! :p
Score: 10 Votes (Like | Disagree)

Tones2
And thus the importance of marketing in a capatalistic society.