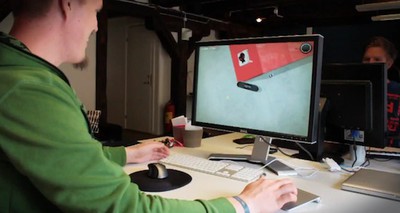 Way back in January 2010, development firm Illusion Labs demoed a Mac version of its popular iPhone game Touchgrind, showing off how the sophisticated multi-touch trackpad included on Apple's notebook computers could be used in a novel way for controlling the skateboarding gameplay.

As noted by our sister site Touch Arcade, Illusion Labs has finally followed through and released Touchgrind for OS X [Mac App Store].


Currently available for free from the Mac App Store, Touchgrind can obviously also take advantage of Apple's Magic Trackpad that was released last year, several months after the Touchgrind demo was first created.

It may have taken a while, but Touchgrind has indeed launched in the Mac App Store, and it’s currently completely free. The game controls well with the multi-touch trackpad, though it definitely feels different than the iOS touch screen and does take some getting used to. The view is nice and zoomed out, similar to the iPad version Touchgrind HD [$7.99], which makes it a whole lot easier to tell where you are going while cruising around the skatepark.

Illusion Labs has been aggressive in demoing ideas for moving its iOS games to other devices and platforms, having also shown off Touchgrind and another title, Sway, on a large multi-touch table several years ago.

motulist
I played around with the game and I wasn't impressed at all.
Score: 4 Votes (Like | Disagree)


sadly enough, that's all i took away of this video demo.
Score: 4 Votes (Like | Disagree)

Kevin Paquet
This game sucked so much that I had to login and let you all know that.
Score: 3 Votes (Like | Disagree)

Reach9
It's fun when you completely understand how to play.. but i have yet to get to that point.
Score: 3 Votes (Like | Disagree)

Friday May 14, 2021 11:52 am PDT by Juli Clover
Following the discontinuation of the iMac Pro, Apple also appears to be discontinuing Space Gray "Magic" accessories that it sold separately alongside the iMac Pro. The iMac Pro was the only Space Gray Mac, and Apple designed special matching accessories for it. The Space Gray Magic Mouse 2, Magic Keyboard, and Magic Trackpad all now say "While supplies last" in small wording at the bottom...
Read Full Article • 328 comments

Saturday May 15, 2021 11:08 am PDT by Juli Clover
Twitter has been working on some kind of subscription service since last summer, and Jane Manchun Wong, who often digs into new features coming in apps, has shared details on just what Twitter is exploring. Twitter's subscription service could be called Twitter Blue, and at the current time, it's priced at $2.99 per month. There will be a "Collections" section that allows users to save and...
Read Full Article • 105 comments