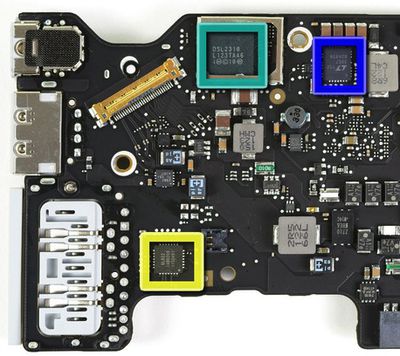 Portion of MacBook Air motherboard with Eagle Ridge chip outlined in teal (Source: iFixit)
AnandTech takes a look at the Thunderbolt controller used by Apple in the new MacBook Air, finding that the company has opted to use a scaled-down "Eagle Ridge" controller chip from Intel instead of the "Light Ridge" chip found in larger Thunderbolt-enabled machines.

Eagle Ridge is available in two form factors (normal and SFF [small form factor]) and is effectively half of a Light Ridge chip. That means you only get two Thunderbolt channels and one DP output. Apple used the small form factor version of Eagle Ridge in its new MacBook Air to cut cost and save on motherboard real estate.

With Eagle Ridge only supporting a single DisplayPort output, MacBook Air users are only able to drive a single external display via the Thunderbolt port, although the machine's integrated Intel HD Graphics 3000 would also preclude the use of two external monitors on the MacBook Air as it does on the 13-inch MacBook Pro.

Thunderbolt adoption has thus far been limited to high-end devices in part due to high costs associated with inclusion of the technology. Use of the scaled-down Eagle Ridge controller could help push Thunderbolt into lower-end products, presuming that the smaller chip carries some cost savings for manufacturers.

First off, this is about the Macbook Air, not the Macbook Pro. The Air has considerably less room inside of it then the Pro model does.

Second, this really doesn't mean that it is crippled. It just means that can only have one extra display hooked up to it. Kinda like how the previous Air models were and the previous iMac and MacBook Pro models were before Thunderbolt came a long.

This is first generation technology. It will get refined and i bet that we will see the quad channels eventually.

My question to you is, how are you going to use 4GB of bandwidth per second? Only my VMware ESXi servers use dual 10G fiber cards. I mean, that is a lot of data moving back and forth. Most people would never come even close to utilizing that much bandwidth. So to say that the device is crippled is ridiculous....
Score: 8 Votes (Like | Disagree)

I was more enthusiastic about this Air refresh (I have the previous generation with the 320M GPU), but every day there's a piece of news about how it's not sooo amazing as expected: Different SSD models ("did you get the fast one?"), integrated GPU "almost as good" as nVidia offer, and now a thunderbolt port that's, let's face it, crippled down compared to other Macs.


To me it just sounds like you are trying to make yourself feel better about having a previous generation. There is nothing wrong with doing that mental justification if it helps you, but the reality it is still a fantastic update to the MBA line.

The GPU thing is unavoidable due to licensing, and while the HD 3000 isn't as impressive on paper, it still performs well enough. The simple fact is that nobody is going to be doing high-end GPU work on the MBA because of battery constraints. Gaming has always been a "bonus" achievement, and never a requirement.

The different SSD models is the most overrated debate ever, there is absolutely no practical difference between the two drives, and the only people upset are people who run benchmarks all day long to inflate their ego.

Finally, this news about the Thunderbolt chip, you need to understand that this is not a gimped Thunderbolt, or less powerful. It still does the 10Gbps requirement of Thunderbolt, and that is all that really matters. You aren't going to be daisy chaining 5 devices that can make use of 100% of the bandwidth on the MBA. It's simply just not a situation that would ever happen. Having 2 channels at 10Gbps means that you can drive one display, plus any number of devices that could use up to 20Gbps (thats a TON) of bandwidth. To put that into perspective, you would need ~2000 Blu-rays running at the exact same time to saturate that kind of bandwidth. That's an insane amount of bandwidth, and the fact that you think it's "gimped" is hilarious.
Score: 7 Votes (Like | Disagree)

"Anandtech’s report also notes that the MacBook Air’s cheaper chip is likely to be the one used by PC makers who are making machines traditionally less expensive than those from Apple."
Score: 7 Votes (Like | Disagree)

According to CultofMac.com: "The scaled down Thunderbolt chip used in the new MacBook Airs, however, is named Eagle Ridge, and features only two Thunderbolt channels  meaning its half as fast  with support for just one external display."


This doesn't mean you have half the bandwidth available for Eagle Ridge - you still have bidirectional 10Gbps interface for both Eagle Ridge (MBA version of thunderbolt) and Light Ridge (MBP/iMac version of thunderbolt). It only means Eagle Ridge has one displayport interface for external display as opposed to two on Light Ridge. If you look at the anandtech's test result with the Pegasus array, you'll see that both MBA and MBP perform practically the same.
Score: 5 Votes (Like | Disagree)

Thunderbolt is so overrated. Apple should adopt USB3.0 asap.

Thunderbolt is not supposed to replace USB 3.0, it's meant to supplement it. Thunderbolt has so many more capabilities compared to USB.
Score: 5 Votes (Like | Disagree)

justinfreid
This seems like reasonable product differentiation to me.
Besides, only a small minority of users will ever drive 2 external displays from their laptop.
Score: 4 Votes (Like | Disagree)
Read All Comments