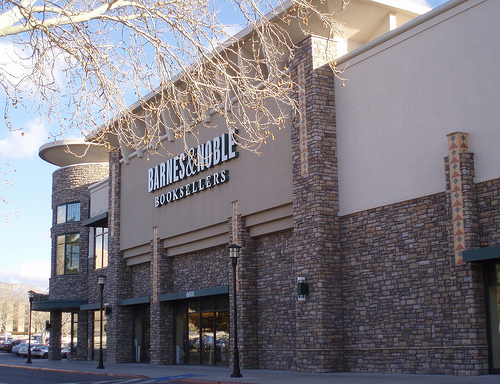 Apple may be looking at an acquisition of bookseller Barnes & Noble, according to an "unproven source" at BGR:

We received a tip from an unproven source claiming to have knowledge of discussions within Apple to possibly purchase Barnes & Noble...

This unproven source also said that iTunes 11 would be released in September along with iOS 5 and iCloud, and will support reading iBooks on computers as well as textbook purchases and rentals.

It's unclear what Apple would gain from such a purchase. B&N has more than 700 stores plus another 600 college bookstores, as well as decent digital penetration with its own eBookstore and Nook e-reader.

Barnes & Noble is currently trading with a market cap just above $1b, which would be a very small dent in Apple's $76 billion cash pile, though the price would obviously be higher as a takeover premium.

We're a little skeptical about the whole thing and mention it primarily to encourage conversation. If Apple really wanted to purchase a bookseller, it could have bought Borders at fire sale prices. Wall Street seems unimpressed by the rumor: Barnes & Noble's stock price is flat on the day.

TimUSCA
"We received a tip from an unproven source..."

That pretty much sums it up. This was pulled right out of someone's butt.
Rating: 21 Votes

HarryKeogh
Is this rumor from the same guy who said the next gen iPad would have a built-in LaserDisc drive?
Rating: 15 Votes

btbrossard
They could have gotten Borders for $50 in iTunes gift cards if they wanted a bookseller.
Rating: 11 Votes

gmcalpin
Maybe Apple is in discussions with Barnes & Noble, but it's not to buy them. That wouldn't make a lick of sense.
Rating: 7 Votes

rorschach
This is silly. What would Apple do with all the brick-and-mortar stores? This is another "Apple to buy Twitter" or "Apple to buy EA" rumor.

If the rumor was Apple looking to buy Amazon…that might be a different story (even if it's also unrealistic, it would still make more sense than this).
Rating: 6 Votes

Les Kern
Dateline: June 2056
(AP) Appleville - Formerly Cupertino
Apple today announced the acquisition of Chuckie Cheese, making Apple the sole owner of every corporation in the world. A spokesman said they plan on rolling out different colored Apple logos so people will be able to tell the difference between product lines, and in the case of Chuckie Cheese all pies will have the distinctive shape of the ubiquitous Apple logo.

The corpse of Steve Jobs will also attend the upcoming WWDC at the Steve Jobs Center for Awesomeness in Appleville. He is expected to appear for the obligatory 5 minute standing ovation and then be propped in a corner casting his infamous evil eye.

Like my weird story, this is a weird rumor. Can't see the point in it besides more Apple stores. Books????
Rating: 5 Votes

I really feel like quality of "front page" stories has decreased over the past few months on MacRumors.

If by some chance in hell more evidence came forward, then you could move it to front page. But now? That's just ridiculous

I've been following MR for ages, and some of the best threads/stories over the years have turned out to be the fakes and the rumors that don't come true. Just watching everyone here attack the fakes is worth the price of admission alone. If you want hard news, go elsewhere. Here, it's unsubstantiated rumors and fakes galore... and an occasional real tidbit. Try to have some fun with it.
Rating: 4 Votes

reallynotnick
I swear people just want Apple to spend their cash on something, this is the dumbest rumor I have seen yet.
No chance in hell Apple will buy Barnes and Noble.
Rating: 4 Votes