With the release of Lion, users can now see some of the groundwork that Apple has laid down in OS X for ultra high resolution displays. We covered Apple's support of these new "HiDPI" modes while OS X Lion was still in beta.

For those who have downloaded Apple's Xcode for Lion, you can enable "HiDPI" mode in the Quartz Debug application found in the Developer directory. Once enabled, OS X's Displays control panel offers additional 1/4 (and lower) resolution sizes as shown here on a 30" Cinema Display with a native resolution of 2560x1600: 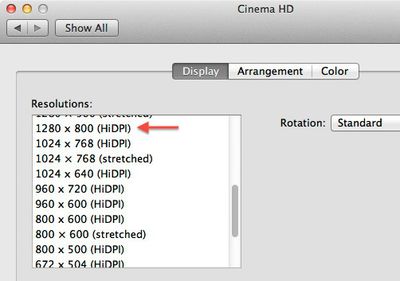 Unfortunately, there's not much to see yet. The 1280x800 HiDPI resolution shown here represents exactly 1/4 of the area of the native resolution of the 30" Cinema Display and simply offers you a zoomed in view on present day monitors.

The reasoning is that when displays do reach ultra high resolutions and dots per inch (DPI), simply drawing the OS X interface as-is would result in very small interface elements. Apple's solution is to scale all on-screen elements automatically by a factor of two (in each direction).

So, in the future, we might be using 2560x1600 (HiDPI) mode on a theoretical 30" 5120x3200 pixel display. All user interface elements would stay the same size as today's 30" Cinema Display, but when available, higher resolution textures would be used to render the graphics. This is the same way that it worked when Apple transitioned from the original iPhone resolution to the iPhone 4's retina display.

Arstechnica offers a good example screenshot showing this in effect. Fonts already render in the higher resolution while bitmapped graphics demonstrate a blocky effect as they have not yet been replaced with high resolution ("Retina") graphics.

The groundwork is there now, so when technology catches up, we could see double-DPI Retina displays in our future.

Why not go vector based? Then it will scale to whatever you like.


because it's hard to make all graphics into vectors?

Why not go vector based? Then it will scale to whatever you like.


You're not a software developer, are you?
Scaling is not the problem. Scaling and not looking like ****, that is the problem.
Score: 7 Votes (Like | Disagree)

So, maybe you'd care to enlighten us ? Maybe I'm just nostalgic for the 80s and 90s, back when vector graphics were a possibility. Now that we have much more powerful CPUs and GPUs, it seems that vector graphics have become way too hard to handle... :rolleyes:

Only stuff that's required to scale. IE : the UI.

And games have been using vector graphics since the 80s and 90s, at least, games made with a little known technology called Flash. Or the above Sierra game, Conquest of Camelot ;) In fact, isn't that screenshot from a game that uses vector graphics ? (Plants vs Zombies ?).

Obviously, not all UI elements are needed to scale. The desktop wallpaper can remain a bitmap image, but things like icons, buttons, fonts and all UI controls would need to be scaled.


Sure, I'll help enlighten. ;) Here are just a few points (some of which Arn has already pointed out):


* Photorealistic graphics. As stated multiple times, you can't use vector for this.
* Pixel-perfect designs. When you see a gorgeous iPhone or iPad app, it's because of this. You can't just resize a vector icon and expect it to look great at any size. It simply doesn't work like that.
* Processing power. Load a complicated piece of vector artwork in Illustrator. It takes time to process all the math in a vector illustration.
* File size. Making the assumption that vector is always smaller is wildly incorrect. Sometimes it is, sometimes it isn't.
* Textures. Wood, cloth, stone, grunge. Those detailed, fantastic textures aren't vector -- they're raster. Can you use vector for them? Yes, the simple ones. But to get the same depth of detail (and you never will, because textures are often photorealistic), you get back to hurting processing power.
* Effects rendering. Rasterizing an effect is much simpler than combining it with vector art. It's simple for the designer, prevents a developer from having to code the effect (which is no small task), and saves processing power.
* Development time. Coding for vector in everything can increase development time due to the shortcomings of vector-based art. Often it's just faster to use rasterized artwork. Keep in mind this doesn't mean a designer doesn't use vector in his workflow, it just means that he saves it to raster at the end.


These are just a few things off the top of my head. I'm sure there are many more, but I don't have time to write a short story. ;)
Score: 5 Votes (Like | Disagree)

Maybe, but I know for a fact vector file sizes are much larger


No they are much smaller. They contain less information.
Score: 5 Votes (Like | Disagree)

That's funny, I could have sworn you originally said:

Man up and admit you were wrong for goodness sakes.


I was replying to a generalisation of the fact. Someone stated they are bigger. I said they are not, in response to their generalisation. I could of gone all boring and started stating static vector filesizes and variable bitmap sizes for scaled images of each format but I didn't.

What is your problem anyway? I asked a question 'why cant vectors be used?'. Someone, maybe you, responded and I then asked a further question regarding the response? Are we not allowed to ask questions on forums these days without people looking for a fight? Why do I have to 'man up' when I have already stated I dont fully understand the concept?

I'm asking questions because I don't understand something. I don't pretend to understand things either unlike some people around here.
Score: 4 Votes (Like | Disagree)
Read All Comments