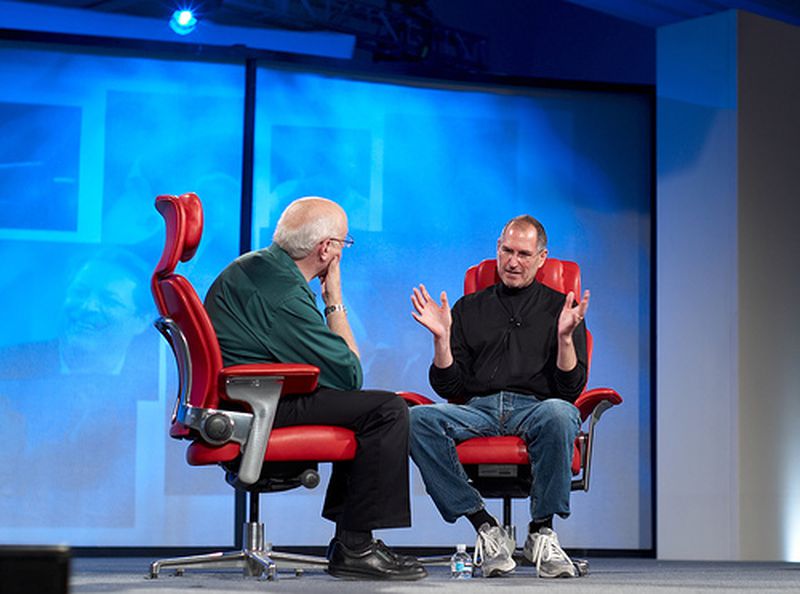 The authorized biography of Steve Jobs, announced earlier this year and scheduled to be released by Simon & Schuster in March 2012, has a new title.

According to Fortune, the old title, iSteve: The Book of Jobs, chosen by the publisher's publicity department, wasn't a favorite around author Walter Isaacson's household. Isaacson has succeeded in getting a new title approved:

In 2010, it was first reported that Steve Jobs had agreed to participate in an authorized biography. The book is due on March 6th, 2012 and is already available for pre-order from Amazon.

I wonder when people will start lining up outside Barnes and Noble?


Why do that when we have Kindles and iPads?
Rating: 16 Votes

koobcamuk
Excellent. A much better name for an autobiography.
Rating: 14 Votes

AppleScruff1
I wonder when people will start lining up outside Barnes and Noble?
Rating: 11 Votes

Why do that when we have torrents?

I'm sure Steve won't mind missing out on a little cash not entering his 95ct gold lined wallet.


:D no cash enters his gold lined wallet besides the $1 he gets every year from his job at Apple...
Rating: 9 Votes

Porco
Apparently the first edition will have extra blank pages and heavy paper. The second print will be 10% lighter and thinner. The third print will drop support for words altogether (though you can still write your own on the 20 blank pages provided).

The fourth print (Steve Jobs by Walter Isaacson 4P) will be a thought rather than a physical product. It will cost more than the print versions, and you may not share it.
Rating: 8 Votes

The guy is almost certainly going die reasonably soon (morbid I realise but realistic). This is the only chance there will be for an official Biography. This is a big deal for all involved in it's production. I wouldn't want my official biography to have a cheesy pun title, I'd wan it done tastefully and at least approach my life & work with respect. "iSteve" was not a classy title.

oban14
As it's authorized, it'll be interesting to see how much of his drug usage gets included.
Rating: 7 Votes

Takeo
Brilliant. So much better. iSteve was so lame. And using just his name and nothing else really speaks to Apple's austere aesthetic. Simple. Functional. Nothing there that doesn't need to be.
Rating: 7 Votes

Excellent. A much better name for an autobiography.


Because it would be more Apple-like to wait in line for a few days, after all, this is the messiahs autobiography, not just an iPad or iPhone.


FYI it's not an autobiography. It would be if Steve was writing it himself.
Rating: 7 Votes