Ever since Apple and Intel introduced the Thunderbolt high-speed data connectivity standard back in late February, there has been speculation about whether the standard would support booting from external disks. At that initial release on revamped MacBook Pros, Andy Ihnatko reported that booting was not supported, although Target Disk Mode was supported. But a report from The Mac Observer early last month indicated that booting from disk would be supported over Thunderbolt.

With Apple's Thunderbolt cable and the first third-party drive systems hitting the Apple Store yesterday, Apple posted a few support articles outlining some of the Thunderbolt functionality, but failing to disclose any booting capabilities and thus leaving potential customers still in the dark about compatibility. 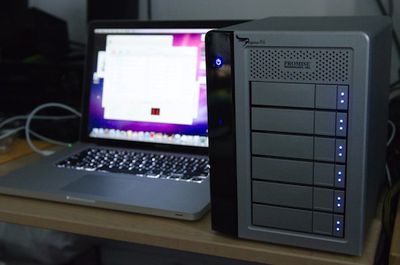 AnandTech's 12 TB Promise RAID setup
It now appears, however, that we do have confirmation that booting over Thunderbolt is supported, as we received word yesterday from a reader who had received multiple confirmations from LaCie representatives that the feature will indeed be supported. Meanwhile, AnandTech has already received one of the new 12 TB RAID systems from Promise and confirms that booting over Thunderbolt is supported.
Tag: anandtech.com
[ 104 comments ]

There's really no reason why it shouldn't.
If Apple expects their proprietary cable to become a defacto standard they can't be imposing restrictions just to protect their precious... (OSX).

The fact that they are currently the only people making them doesn't mean it's proprietary.
Score: 18 Votes (Like | Disagree)

0815
Anything else would have been a big fail.

This is the beauty of MacOS that you can easily clone (a live running) system to external drives and than boot up the same (or complete different Mac) from that image. Would have been sad not to support this.
Score: 12 Votes (Like | Disagree)

ratsg
Its not proprietary, and its not Apple's. It's Intel's.

Didn't we have a story last week where either HP or Sony was adding Thunderbolt technology to their systems, but under a different name?

There's really no reason why it shouldn't.
If Apple expects their proprietary cable to become a defacto standard they can't be imposing restrictions just to protect their precious... (OSX).

macbwizard
Um... any modern mac can boot from USB as well as FW, not sure why anyone expected TB to be any different.
Score: 9 Votes (Like | Disagree)

I assume that other manufacturers will start shipping TB cables for less money.

Just like an HDMI cable that sells for $75 at a retail store can be purchased for $10 from other suppliers, I expect that in a few months, we'll be able to find TB cables selling in the $5-10 range.
Score: 7 Votes (Like | Disagree)

gramirez2012
It's 2011, ALL storage buses should be bootable.
Score: 6 Votes (Like | Disagree)
Read All Comments

Sunday July 3, 2022 8:07 pm PDT by Sami Fathi
While past rumors have indicated the upcoming second-generation AirPods Pro will feature a built-in heart rate and body temperature sensor, Bloomberg's Mark Gurman has cast doubt on those rumors turning out to be true, saying instead such a feature is unlikely to come anytime soon. "Over the past few months, there have been rumors about this year's model gaining the ability to determine a...
Read Full Article • 70 comments

Monday July 4, 2022 5:50 am PDT by Hartley Charlton
Apple is working on an Apple Watch Series 8 model with a larger display, according to DSCC's Ross Young and Haitong International Securities's Jeff Pu. In October last year, Young suggested that the Apple Watch Series 8 could come in three display sizes. Now, responding to a query about the rumor on Twitter, Young claims that the additional display size joining the Apple Watch lineup will be ...
Read Full Article • 166 comments