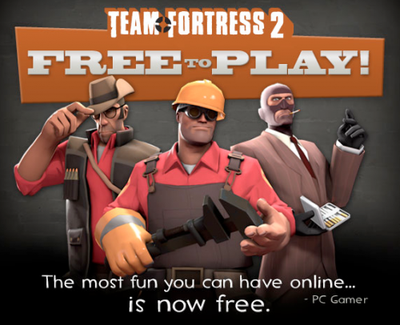 Team Fortress 2, Valve's class-based cartoonish first-person shooter, which was one of the first Steam-powered games to arrive on the Mac, is now totally free. Valve will generate revenue from TF2 by selling the many items available through random drops in the game via microtransactions in a TF2 store.

Players can purchase new weapons and upgrades through the Steam Wallet, Steam's microtransaction service. For players who don't want to spend any money (and don't mind waiting), TF2 will keep its random drop system, which will eventually hand out all the upgrades the game has to offer.

Many of the new items that the company adds to the game are created by community members, and Valve splits revenue from community-designed items with the creator, much like Apple's App Store.

Team Fortress 2 manager Robin Walker said in an interview with Develop that for multiplayer games in particular, the more folks playing the game, the better.

The more players, the more available servers in your area, the wider variety of other players you'll find, the greater the opportunity for new experiences, and so on.

Another way we think of it is that there are a class of players who will never pay us a dime, for a variety of reasons. We're not upset by that, it's just a constraint we need to design around. The interesting problem to solve is how to make those freeloaders produce value for our paying customers. Obviously, getting those free players into the game is the first step to doing that.

all good things must come to an end.I can't really see TF2 having much more life left in it, even with an uber charge ;)

/edit/ don't get me wrong. I think it will last another year or two but I think we will start to see its decline in the not so distant future


Given that the 2 most played games on Steam are almost always Counterstrike, even before CS Source got an update, no. I can't see TF2 waning until Steam is dead or TF3 is out. Even then just look at the thriving CS community even though CS Source exists.
Score: 3 Votes (Like | Disagree)

Truffy
The most fun with Team Fortress:
http://youtu.be/Nds1T7U9FqY
Score: 3 Votes (Like | Disagree)

Michaelgtrusa
Very nice of them.
Score: 3 Votes (Like | Disagree)

VPrime
I like how they are separating paid and free.. If you have ever paid for TF2 (either bought ht game previously, or paid for items)
You are a "Premium" player compared to a free player. I don't know what the advantages of being premium is, but at least they are acknowledging paid customers still.
:cool:
Score: 2 Votes (Like | Disagree)

Thanks mac rumours yay! This will do nicely on my beast 27inch imac :D
Score: 2 Votes (Like | Disagree)
Read All Comments

Saturday February 4, 2023 1:30 am PST by Hartley Charlton
Google's Chromium developers are working on an experimental web browser for iOS that would break Apple's browser engine restrictions, The Register reports. The experimental browser, which is being actively pursued by developers, uses Google's Blink engine. Yet if Google attempted to release it on the App Store, it would not pass Apple's App Review process. Apple's App Store rules dictate...
Read Full Article • 199 comments