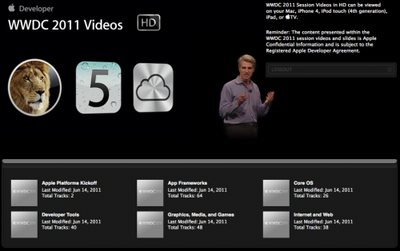 Apple is in the process of posting videos from the WWDC 2011 on iTunes and Apple's developer page. The video page was updated briefly yesterday, but the videos were never posted but we have confirmed that they are available on iTunes.

Videos can be accessed in either SD or HD by registered developers by visiting the Development Videos page and clicking on "Log in to iTunes" on the bottom left.

Torrijos
Some of these are must see for the skeptics that believe that Lion hasn't major changes in its entrails.
Score: 3 Votes (Like | Disagree)

MrNomNoms
I've watched 3 videos already and I'm having a geekgasm - anyone who says that Lion is a minimal upgrade need to have a look at all 110 videos that are available then come back and repeat what they said. What I think the biggest thing will be be what third parties and Apple do when it comes to middleware.

After having a look at the videos I'm really shocked/surprised at how many changes they have made since Snow Leopard was released - the changes they've made are hardly things that one can complete on a rainy weekend.
Score: 2 Votes (Like | Disagree)

Some of these are must see for the skeptics that believe that Lion hasn't major changes in its entrails.

Agreed. And unfortunately, even though the OS underlying features say otherwise, we will still get the same garbage from people saying things like "APPLE DOESNT CARE ABOUT THE PROFESSIONALS ANYMORE" all over the forums (the same people who won't be able to describe how Lion hinders their workflow :P).

I myself am SUPER excited for OpenGL 3.2 since it means not only can I start learning OpenGL 3.2 programming but it also means that the amazing texture painting program Mari can come to the Mac.

EDIT: OMG they have an OpenGL video! Time to take a break from game making to watch a movie...
Score: 2 Votes (Like | Disagree)

EDIT: OMG they have an OpenGL video! Time to take a break from game making to watch a movie...

How was the video? Anything in there about 3.2 in particular? :)

I looked at most of the video a few hours ago, and if I understand correctly we could see quite big OpenGL performance improvements (i.e. frame rate improvements etc.) if developers start using the new ”OpenGL Core Profile” features in Lion. Looking at the demo at the end it seems quite capable of improving frame rates.

Would be great for games and other 3D applications.

I asked the developer Feral for any possible frame rate increases for the game Borderlands in Lion and got this reply:

”...and unfortunately the advances in OpenGL that you refer to are not relevant to any performance increase.” :(

I also mentioned that the Windows version of the game Bioshock is better in Windows (tried the demo on both Mac OS X and Windows 7 on the same hardware. The response on this:

”The Mac version is slower than the PC on the same hardware because OpenGL does not have the features or optimisations that you will find in directX - this is because DirectX is designed specifically for gaming and as such has had over a billion dollars of R&D spent on it by Microsoft as part of the Xbox program.”

They are available to free, basic tier developers as well.
Score: 1 Votes (Like | Disagree)
Read All Comments