Even as a judge is expressing skepticism over whether Apple can win its case against Amazon regarding the "App Store" trademark, Apple continues to send out cease and desist letters to other entities using the term in their businesses. 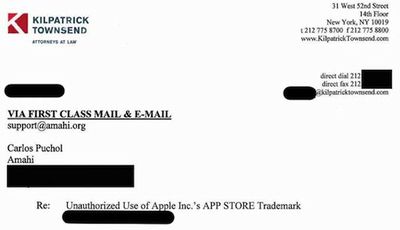 Earlier this week, open source startup Amahi reported on its blog (via The Next Web) that Apple had served the company with a cease and desist letter demanding that it stop using an "App Store" section heading on its website. Apple has demanded that Amahi cease using the "App Store" term on its website and to "refrain from such uses in the future."

Why Amahi? Why pick on such a small target when there are so many people using the app store term? Amahi is a Open Source startup, and is not even in the mobile space. We may never know ...

We're still trying to determine what is the best course of action, however, this looks like a rather heavy handed move. Amahi being literally nothing next to Apple (sigh) we do not have the resources to fight this battle.

Amahi has launched a "name the store" contest to allow its users to help create a new, non-infringing name for the company's application marketplace. For the time being, Amahi has cleverly begun using a randomized list of names such as "App Depot", "Appalog", "App Market", "Addons", "Amahi Apps", "Appmahi", and many more on the tab that previously contained the "App Store" term.

But Apple has been targeting even smaller entities as well, as we just heard from the owner of pcappstore.com, who says that Apple yesterday sent him a cease and desist email, with the official paperwork still on its way to him. In this case, Apple has gone beyond a simple cease and desist order and additionally demanded that the owner turn over the pcappstore.com domain to Apple, citing the potential for customer confusion.

The site owner notes that he has owned the domain since November 2008, after Apple debuted its App Store earlier in the year.

Apple has yet to even officially be granted the registered "App Store" trademark, having applied for it in July 2008 as the marketplace debuted. The U.S. Patent and Trademark Office tentatively granted Apple the trademark in January 2010 and published it for opposition, and Microsoft has been leading an effort to have the mark denied.

toddybody
What a group of bitching lawyers.
Score: 11 Votes (Like | Disagree)

Perhaps they should be removed from MS at the same time?


If Windows was a brand of windows, I would agree.
Score: 10 Votes (Like | Disagree)

instead of wasting their time on this Apple needs to fix the iOS issues in 4.3.3


People go after Loadsys when they pick on the little devs for their patent.

People support Apple when they go after small startups for using their trademark.

Capt Underpants
Apple should give it up. It's getting petty.
Score: 6 Votes (Like | Disagree)

Maybe Apple should then prevent their CEO from diluting the mark :

In that call, Jobs said, "In addition to Google's own app marketplace, Amazon, Verizon and Vodafone have all announced that they are creating their own [B]app stores for Android[/B]. So there will be at least four app stores on Android, which customers must search among to find the app they want and developers will need to work with to distribute their apps and get paid."

So much for that.
Score: 6 Votes (Like | Disagree)
Read All Comments