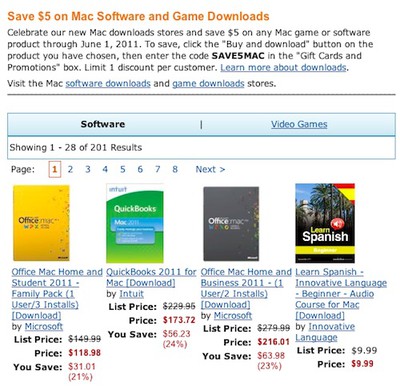 Competing directing with Apple's Mac Store, Amazon says its store has 250 of the biggest software and game titles available for Mac. In fact, they have some titles that Apple's store doesn't.

A number of popular video game publishers including EA, Aspyr, and Feral Interactive are also included on Amazon's store.

To celebrate the launch of the Mac download store, Amazon is offering a one-time use coupon good for $5 off of a purchase from the store through June 1st.


And why is that? Since when has offering digital downloads been illegal?
Score: 18 Votes (Like | Disagree)

vincenz
Can't hurt to have more choices as a consumer :)
Score: 17 Votes (Like | Disagree)

ivantod
For us in Europe, it should probably be mentioned that this service is, as expected, of course US only.
Score: 8 Votes (Like | Disagree)
Read All Comments