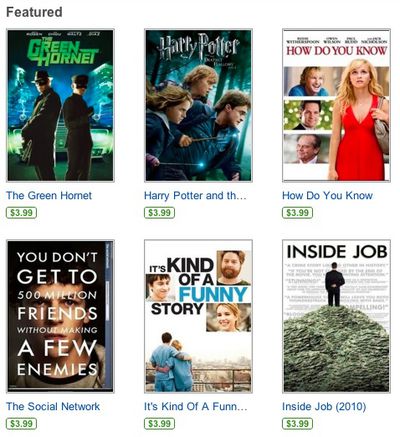 YouTube yesterday announced the launch of streaming movie rentals, taking on Apple's iTunes Store offerings that have grown to include a variety of streaming and downloadable rental options as well as digital purchases. YouTube's new rental service, which comes at "industry standard pricing" typically in the range of $2.99-$3.99, builds upon free movie offerings the site has offered for several years.

Today, we're announcing another step in our goal to bring more of the video you love to YouTube: the addition of thousands of full-length feature films from major Hollywood studios available to rent in the US at youtube.com/movies. In addition to the hundreds of free movies available on the site since 2009, you will be able to find and rent some of your favorite films. From memorable hits and cult classics like Caddyshack, Goodfellas, Scarface, and Taxi Driver to blockbuster new releases like Inception, The King's Speech, Little Fockers, The Green Hornet and Despicable Me. Movies are available to rent at industry standard pricing, and can be watched with your YouTube account on any computer. The new titles will begin appearing later today and over the coming weeks to www.youtube.com/movies, so keep checking back.

YouTube is also offering "Movie Extras" for a number of its films, including free behind-the-scenes clips, interviews and other content, as well as integrated movie ratings and reviews from Rotten Tomatoes. Similar to Apple's policies for iTunes movie rentals, YouTube rentals give users up to 30 days to view a rented film after initiating access and 24 hours to complete watching the film once viewing is started.

YouTube began discussions with major movie studios about movie rentals over a year and a half ago, rolling out a trial of the service to thousands of Google employees, but it has apparently taken until now to work through any licensing and technical issues to go live in a market that Apple has dominated.

And is this available to those of us outside the US?

For an hour and a half movie, I can expect it to take at least two hours including buffering.

Sorry, Google, but I'm not interested in paying for a terrible experience.


So Apple's and Netflix's rentals all work fine but Google's too dumb to figure it out?

What makes you think that?
Score: 7 Votes (Like | Disagree)

For an hour and a half movie, I can expect it to take at least two hours including buffering.

Sorry, Google, but I'm not interested in paying for a terrible experience.


So Apple's and Netflix's rentals all work fine but Google's too dumb to figure it out?

What makes you think that?

Have you ever used YouTube? The amount of buffering that goes on for even the shortest of videos is crazy
Score: 5 Votes (Like | Disagree)

nwcs
I would rather watch on my TV and right now that would mean via Apple TV. Not everyone wants to spend hours behind a computer screen for leisure.
Score: 5 Votes (Like | Disagree)