Steve Jobs' Reaction to MobileMe Launch, Life at Apple After Jobs, and Other Anecdotes 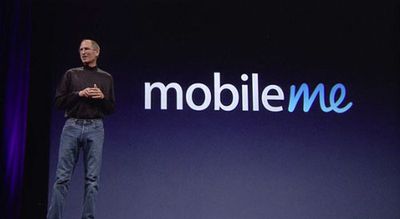 MacStories details a new feature story from Fortune about Apple's management including a number of previously unknown anecdotes about Steve Jobs. The story is presently only available as an in-app purchase in the Fortune Magazine App [iTunes], but should appear online and in print shortly.

One interesting story is about Steve Jobs' reaction to the poor MobileMe rollout in 2008 which was marred with slow services and downtime.

In Fortune's story, Lashinsky says Steve Jobs summoned the entire MobileMe team for a meeting at the company's on-campus Town Hall, accusing everyone of "tarnishing Apple's reputation." He told the members of the team they "should hate each other for having let each other down", and went on to name new executives on the spot to run the MobileMe team. A few excerpts from the article.

"Can anyone tell me what MobileMe is supposed to do?" Having received a satisfactory answer, he continues, "So why the f*** doesn't it do that?"

"Mossberg, our friend, is no longer writing good things about us."

Jobs reportedly appointed a new executive on the spot to run the MobileMe team. Another particularly interesting piece was the fact that Apple is actively planning and teaching its employees for "life at Apple after Jobs.":

Steve Jobs hired dean of Yale School of Management Joel Podolny to run the Apple University, an internal group also featuring business professors and Harvard veterans that are writing a series of case studies to prepare employees for the life at Apple after Jobs. These case studies focus on Apples recent business decisions and internal culture, they are exclusive to employees and taught by top executives like Tim Cook and Ron Johnson.

MacStories also summarizes some of the other anecdotes from the feature article.

Yes, he does take the heat. However, there are better ways of going about it... you don't *degrade* your employees.


Hate to destroy your vision of the OCD, angry, mercurial Steven P. Jobs with a whip persona, but the man on a daily basis talks and commends people across all lines of work he has his interest in.

He calls a spade a spade. He is always the first to praise his staff for superb work. Do you expect him to give them all a Capri Sun and we'll get'em next time kids when they deserve to be challenged for their efforts?

There are an awful lot of multi-millionaires working at Apple ever since Steve returned.

Nearly 33% of the staff was about to take 12 week sabbaticals when NeXT took over. They were all walking out of the company.

He ended that ridiculous program and told them they can walk now.

Most stayed and realized the man had vision far beyond the stories they had read.

The rest is proof of his broad vision.

Either you are a focus person or one who needs coddling. This isn't high school.

You either speak up and find your niche working there and leave because of other circumstances [as I did] or you moan and complain about the great Tyrant Steve Jobs that only ever existed amidst people who grew up always being praised as if they were mini-gods for just being able to participate in a school sport.

You earn your pay and take pride in your work. If you have no pride to be the best, don't apply.
Score: 23 Votes (Like | Disagree)

"Can anyone tell me what MobileMe is supposed to do? Having received a satisfactory answer, he continues, So why the ******* doesnt it do that?"


As a paying customer from the start of MobileMe, I find this incredibly amusing and wish I could've been in the room when this smack down was being hand delivered hot and fresh.
Score: 21 Votes (Like | Disagree)

Grow up? No.. I've worked for long enough to know what you do and don't do to your employees. Sure, you don't wrap them up in cotton wool.... of course not.. but you don't go for the other extreme as well. You find out what went wrong and handle it *maturely* without lashing out. A *good* company will *learn* from its mistakes... Lashing out / degrading employees shows the culture of a company.


Steve Jobs created a billion dollar company. I doubt he's going to change his personality and management style. He knows what he needs to do to be successful, even if that means a few people won't like him.

That's why he has billions of dollars and you don't.

Talking to employees like that is a good way for them to leave. A company that treats employees badly get a reputation, unfortunately, larger companies get a way with it. For example, EA. But they can still hire because who they are.

Perhaps the MobileMe problems were further up the chain?

Sounds like Apple has a culture of blame. A kind of company any employee wants to avoid like the plague.

Horse crap. If you have to have your ass chewed to get motivated it's clear you didn't put your best effort into your projects. He takes all the heat for any decision that Apple makes and produces for his stock holders.

You think he's going to coach everyone up like a life coach or your best friend?

You think Google, MS, IBM, Intel, AMD, Nvidia, etc., don't do the same thing? If so, then you've never been in the trenches.

You either fold or focus. He is the best at getting people to focus and they have the lowest attrition rate in the industry.

Other anecdotes from the story:


* Just two people wrote the code to convert Safari for the iPad
* At Apple there’s never confusion “as to who is responsible for what.” In Apple’s parlance, a DRI’s name (directly responsible individual) always appear on the agenda for a meeting, so that everyone knows who’s the right contact for a project
* Steve Jobs meets with executives on Mondays to review every important project. On Wednesdays, he holds a marketing and communications meeting

Every Friday we turned in our progress reports in QA at NeXT and later at Apple when I was in Professional Services.

When we stopped doing that is when several of us, myself included, left.

Keeping a running history of timelines and achievements motivated everyone, especially when our name was on the report.

Everyone's work was available for review.
Score: 18 Votes (Like | Disagree)

Atlantico
Apple after Steve Jobs will do fine, in fact it will be a very very interesting time. There are thousands of very talented people working at Apple, so I feel confident that things will work out just fine when he retires. :)
Score: 17 Votes (Like | Disagree)
Read All Comments