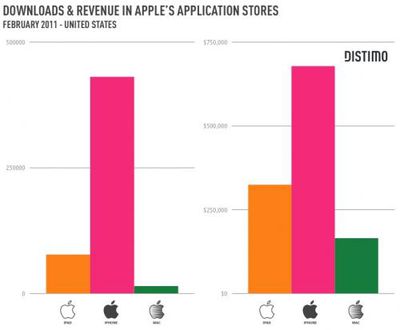 Looking at the 300 most popular apps in each of the iPhone, iPad, and Mac App Stores, Distimo found a clear pattern of popularity, with iPhone and iPod touch apps being downloaded more than five times as often as iPad apps, which themselves are downloaded more than five times as often as Mac apps. But the large disparities in downloads are partially offset by differences in average pricing that see a similar pattern in reverse, although to a lesser degree. Consequently, the differences between each platform are reduced from 5x to 2x when revenue is considered instead of downloads.

The differences in the ratio of downloads and the ratio of revenue is captured in the average selling price of top 300 applications in the different stores: $1.57 on iPhone, $4.19 on iPad and $11.21 in the Mac App Store.

The Mac App Store also skews more toward paid apps in general than iOS apps, with only 12% of Mac App Store applications currently available for free. That compares to 29% of iPad apps and 35% of iPhone/iPod touch apps.

Based on Distimo's numbers, Apple's Mac App Store had about 2,225 applications available in the United States at the end of February when the survey was conducted. Our own sister site AppShopper currently shows that number approaching 3,000.