While today's big news has been the release of new MacBook Pros, the downtime on Apple's online store also brought a number of other changes for other machines, primarily in the areas of build-to-order hard drive and RAM upgrades. 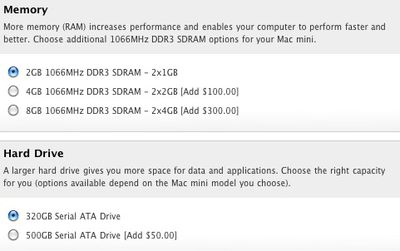 Apple's new Mac mini RAM and hard drive pricing
The Mac mini was also one of a number of machines to see changes to high-end RAM offerings, with the upgrade to 8 GB (2 x 4 GB sticks) now bringing an upcharge of $300 over the base 2 x 1 GB configuration, down from a $500 surcharge previously.

The iMac also sees some RAM tweaks, with the 21.5-inch model seeing the upgrade to 8 GB model holding the same $200 charge as before but moving from a 4 x 2 GB configuration to a 2 x 4 GB configuration, leaving the door open for further upgrades in the two remaining slots.