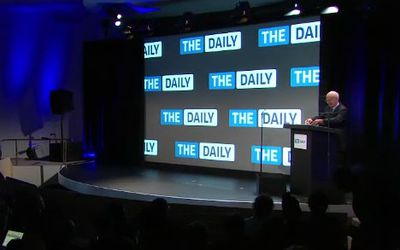 Reuters reports that a prototype model of an unreleased iPad was spotted at today's launch of The Daily.

A Reuters eyewitness saw what appeared to be a working model of the next iPad with a front-facing camera at the top edge of the glass screen at a press conference to mark the debut of News Corp's Daily online paper in New York on Wednesday.

The new iPad was identified by the front-facing camera that is widely expected in the next version of the iPad. According to a separate Reuters source, the device's existence was said to be "confirmed" though the final release model could have other features.

The iPad 2 has filled the rumormill over the past few months. It is expected to ship in the first quarter of this year.