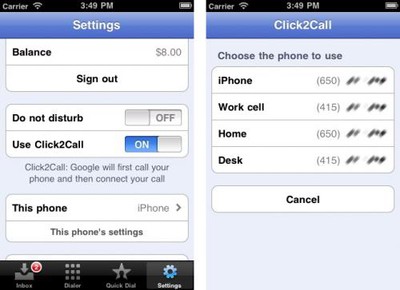 Google today announced that it has updated its Google Voice App Store application to support the iPad and iPod touch. The application, which Google and Apple famously faced off over last year before Apple finally approved the app last month, offers an interface for interacting with Google's telephone service.

Starting today, you can download a new version of Google Voice that lets you use all the features of the app on these devices, such as sending and receiving free text messages - except, of course, make cellular calls.

While iPad and iPod touch users can't use the Google Voice app to make cellular phone calls through the service, Google has developed a system known as Click2Call that allows users to initiate calls through other devices.

The update brings several other improvements, including the ability to set "do not disturb" times during which all calls are sent directly to voicemail and improvements for initiating calls from the address book.