Last month, we noted that UK carrier Orange was preparing to roll out subsidized iPad pricing for those customers willing to sign up for data contracts for the device. paidContent:UK now reports that Orange, Three and T-Mobile have all rolled out the subsidized sales today, offering the 16 GB Wi-Fi + 3G iPad model for £199 with a two-year data contract in the range of £25 per month. Orange and Three are also offering subsidized 32 GB and 64 GB models at £249 and £349 respectively.

While the device pricing is the same across the three carriers and a significant discount from the standalone prices of £529/£599/£699, the data plans offered by the carriers do differ in their features:

- For £25/month, Three offers it bundled with 15GB of data per month. WiFi is not included.

- Orange offers 1GB of data at peak times and 1GB of "quiet time" data (between midnight and 4pm) and 3GB of WiFi usage using BT (NYSE: BT) Openzone, at a price of £25 for current customers or £27 for new customers.

- Meanwhile, T-Mobile is also offering 1GB of data at peak times and 1GB at "quiet time" (which in their case is midnight to 10am) but no WiFi hotspot usage, also for the same price as Orange. T-Mobile's overage, however, is a bit more lenient in that the operator doesn't charge you but then reserve the right to restrict your bandwidth in future.

Customers who expect to maintain cellular data access for their iPads will likely find the new deals enticing, while those who plan to utilize 3G data only occasionally will likely prefer to purchase an unsubsidized iPad and purchase one of the many contract-free data packages offered by the carriers when necessary: 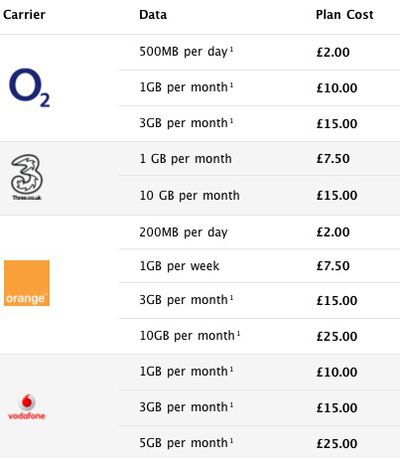 Thursday September 29, 2022 12:38 pm PDT by Juli Clover
Tony Blevins, Apple's vice president of procurement, is set to depart the company after he made a crude comment about his profession in a recent TikTok video, reports Bloomberg. Blevins was in a video by TikTok creator Daniel Mac, who was doing a series on the jobs of people he spotted with expensive cars. After seeing Blevins in an expensive Mercedes-Benz SLR McLaren, Mac asked Blevins what ...
Read Full Article • 684 comments