Both 13-Inch and 11-Inch MacBook Air Models Next Week? 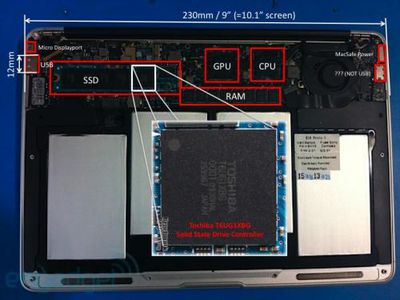 Image labels by diddl14
With the leak of an early MacBook Air prototype, it seems a few more details are emerging about Apple's upcoming release. - AppleInsider adds some claims which we've summarized here:

- The 11.6-inch MacBook Air won't replace the 13.3-Inch model but will complement it as a cheaper option
- Both models will be unibody designs with single button trackpads
- It will be slightly thicker than a standard USB port at its thickest point.

Forum user diddl14 has labeled the leaked picture with these notes and speculation from the forum thread:

- Despite the labeling above, the source of the image reports it is a 13" model, not an 11".
- The chips above do represent an SSD controller/interface
- The silver components are believed to be off-the-shelf batteries which may be replaced with a custom form-fitting battery in the final production
- The prototype was using the same Core 2 Duo processor as the current MacBook Air
- The port on the right is not believed to be another USB port
- The prototype has 2GB of memory
- The source of the leaked image reports a 1440x900 resolution to the 13" model.