Hulu Plus Coming to Roku and TiVo Premiere: Apple TV Next? 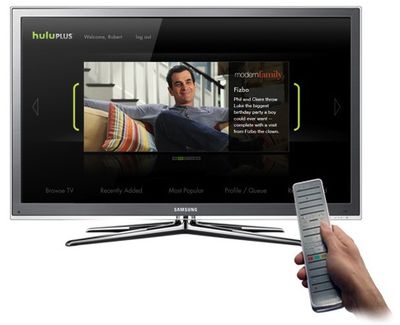 Roku and TiVo today announced that they are bringing support for Hulu Plus subscriptions to their set-top boxes, leading to speculation that a similar deal could eventually be struck for the new Apple TV. The service, which requires an additional $9.99-per-month subscription, will launch on Roku and TiVo Premiere boxes within the next few months.

Hulu Plus offers one of the deepest offerings of current TV shows on a streaming platform to subscribers in the U.S., including every episode of more than 45 current hit programs from ABC, FOX and NBC like Modern Family, Grey's Anatomy, Glee, Family Guy, The Office and 30 Rock. In addition, TV lovers with TiVo Premiere DVRs will be able to enjoy full series runs and numerous back seasons of dozens of classic shows like The X-Files, Law and Order: SVU, Arrested Development, Saturday Night Live, Miami Vice, Ugly Betty, Quantum Leap, Buffy the Vampire Slayer, Angel, Roswell and Ally McBeal.

Hulu Plus launched on the iPad, iPhone and iPod touch earlier this year, and so it seems reasonable to speculate that a version for the iOS-based Apple TV could be in the works. While Apple's AirPlay technology set for public release with iOS 4.2 in November will allow users to stream video content from their portable iOS devices to the new Apple TV, it is unclear whether Hulu, which has been selective in the platforms on which it allows its content to be used, will be compatible with AirPlay. Regardless of Hulu's AirPlay compatibility, however, native support for Hulu Plus on Apple TV would be a significant feature addition for the new device.