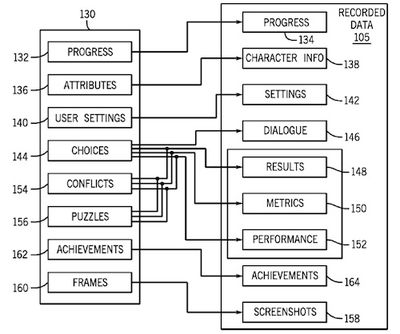 The book content could then be viewed on an electronic device or printed in hardcopy form.

Drawing of Mass Effect screenshot showing profile creation options
As an example of how this technology could be used, Apple offers a series of screenshots from the profile creation portion of the video game Mass Effect, showing how information selected or entered by the player could be used to create a narrative for a book based on the game play. Mass Effect in particular offers users differing game play experiences and endings depending on choices made in the game. Apple's suggested technology could allow users an easy way to share their experience in the game with others once the game has been completed.
[ 76 comments ]

TennisandMusic
How in the heck can Apple patent this? It's just an idea! Ridiculous. On top of that, they completely stole the Mass Effect interface...these guys are patent spamming. Taking other peoples work, throwing in a description of how else it MAY be used, and trying to claim it as their own.

Apple is getting downright dirty lately...
Score: 1 Votes (Like | Disagree)

Doctor Q
This is very clever.

You can already save certain games, after you've played them, as XML files, which you can replay to experience the game again, so this could be a new way to present the same data: turn it into a story form.

It's a new type of "choose your own adventure" story, where you experience the story first-hand as a way to create the book.
Score: 1 Votes (Like | Disagree)
Read All Comments