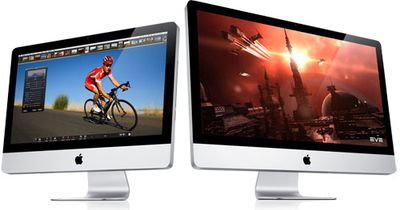 As predicted, Apple launched new iMacs today featuring the latest Intel Core i3, Core i5 and Core i7 processors and new graphics cards.

"We took the world's best all-in-one and made it even better," said Philip Schiller, Apple's senior vice president of Worldwide Product Marketing. "With the latest processors, high-performance graphics and signature aluminum and glass design, customers are going to love the latest iMac."

The new iMacs all feature dedicated graphics cards rather than relying on slower integrated graphics chips. A breakdown of the new models is provided here:

The iMacs were last updated in October 2009.