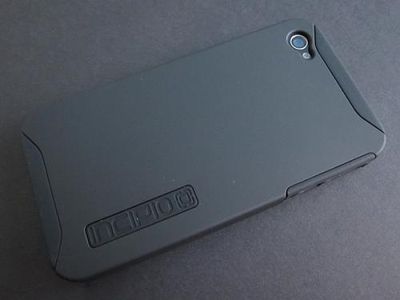 iPhone cases have always been a very popular accessory amongst readers, but has gained even more attention with the iPhone 4 as it can help alleviate some of signal issues you might encounter.

Our iPhone accessories forum has been active with photos and user reviews of the current options. iLounge, however, has taken a more formal approach to reviewing the early iPhone 4 cases and has posted some first impressions. Unfortunately, early case designs can have problems as Apple does not share upcoming product device dimensions with accessory manufacturers before the official announcement. As a result, most of the early in-store case designs were based on the rumored iPhone 4 specs. According to iLounge, this shows:

Developers really rushed out the first handful of cases in order to get early options into AT&T and Best Buy stores, and in some cases are going back and fixing problems they discovered only after the iPhone 4 became available. Issues with the iPhone 4 flash have been most widely discussed, particularly in cases from iFrogz that have mysteriously not arrived here for testing, but also in other cases with backs that werent cut to allow the flash enough room to fire.

Incipio was singled out as one of the manufacturers with good early cases, while iLounge felt that Apple's bumper cases weren't worth recommending at all. They point out a common issue with the bumper cases that only work with the newer slimmer connection cables that Apple has been recently shipping.

Now that accessory manufacturers have the iPhone 4 in hand, we should expect to see improved cases over time. We also hope to see some more creative accessories and add ons in time.

iFixit's teardown revealed that the iPhone 4's glass back slides right off after only removing the two bottom screws. Such a trivial replacement procedure could open the door to 3rd party replacements for the iPhone 4's back.
[ 103 comments ]

Monday May 23, 2022 7:05 am PDT by Hartley Charlton
The iPhone 14 will feature a more expensive "high-end" front-facing camera with autofocus, partly made in South Korea for the first time, ET News reports. Apple reportedly ousted a Chinese candidate to choose LG Innotek, a South Korean company, to supply the iPhone 14's front-facing camera alongside Japan's Sharp. The company is said to have originally planned to switch to LG for the iPhone...
Read Full Article • 90 comments