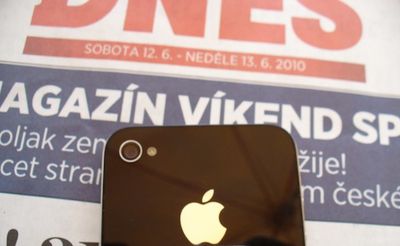 Czech site Jablčkř.cz reveals [Google translation] yet another iPhone 4, backed up by multiple pictures of the device laying on top of a newspaper from this past weekend.

While other leaks and of course Apple's own presentation and marketing materials have shown us the next-generation iPhone in a fair amount of detail, this new report claims to offer a sample of photos and a brief video clip [Direct link to video] taken with the device, demonstrating real-world performance to compare against sample photos and video posted by Apple.

The report notes that an hour's worth of "playing games, surfing, YouTube and Google Maps" resulted in a battery drain of only 10%, bolstering Apple's claims of significantly improved battery performance compared to earlier iPhone models.
[ 210 comments ]

Friday June 24, 2022 2:52 am PDT by Hartley Charlton
Apple is "likely" to announce its long-rumored mixed-reality headset as soon as January 2023, Apple analyst Ming-Chi Kuo has reiterated. Concept render based on purported leaked information by Ian Zelbo In a detailed post on Medium, Kuo explained that Apple's headset will be a "game-changer" for the augmented-reality and virtual-reality market. Describing some of the headset's...
Read Full Article • 128 comments

Sunday June 26, 2022 7:36 am PDT by Joe Rossignol
iPhone 14 Pro models are widely expected to feature always-on displays that allow users to view glanceable information without having to tap to wake the screen. In the latest edition of his Power On newsletter for Bloomberg, Mark Gurman said the feature will include support for iOS 16's new Lock screen widgets for weather, fitness, and more. "Like the Apple Watch, the iPhone 14 Pro will be...
Read Full Article • 120 comments