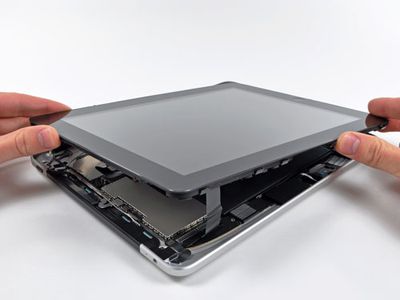 The iPad 3G was delivered to customers on Friday, about a month after the launch of the Wi-Fi iPad. The main differences between the units are the inclusion of a 3G data module as well as GPS functionality in the newer model. iFixit has already performed a teardown of the new unit, though few surprises were found.

Some additional notes of interest:

- Gizmodo notes that Netflix works over 3G but with down sampled video. ABC's app, however, refuses to play over 3G and is Wi-Fi only.
- Dan Frommer suggests ABC's 3G limitation is due to content licensing issues rather than a technical limitation imposed by either Apple or AT&T. When questioned, AT&T deferred to Apple for specifics.
- Gizmodo also describes a comparison of GPS functionality between the iPad and the Phone 3GS. According to their tests, the iPhone 3GS locked onto the GPS signal faster, but the iPad was more accurate and consistent.
- A few MacRumors forum members noted similar improvements in GPS, finding the Navigon app to work much better on the iPad:

With the iPhone navigon would jump me around and tell me to get on the freeway when I was already on the freeway. With the iPad 3G ... It updated my position in real time while I was pulling out of my driveway ... 40 ft.