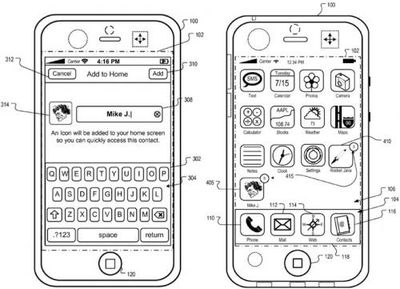 Being Manan notes (via Redmond Pie) a newly-published patent application from Apple describing the ability to add users' contacts directly to the iPhone's home screen, offering one-touch access to various functions related to that contact.

Taking things one step further, the patent application also describes a system in which icons for contacts could automatically appear only temporarily based on the user's proximity to the contact. Such a system is similar in some respects to Google Latitude and Loopt, but would offer direct home screen integration with proximity-based services. Apple has also expressed interest in such "location sharing" technologies in other patent applications.

Today's application also specifically addresses the potential for proximity-based advertising using the same functionality, allowing businesses to offer information to nearby users in the form of contacts that can appear on the home screen of the users' devices.

Apple's proposed system allows for customization of alerts when the user is near a proximity-based contact, either automatically adding the contact to the user's home screen while in close proximity or first requesting permission to do so.

Apple has explored the use of location-based content delivery in previous patent applications, suggesting that it may hold more than just a passing interest in the technology.