While perhaps not as glamorous as 3D display technology, a couple of other patent applications from Apple reveal that the company is working on improving the audio/video experience of their iPod and iPhones.

Apple describes how they might keep track of individual playback characteristics of songs on an iPod in order to improve the overall user experience. Apple could, for example, track a user's preferences for volume, start time, equalizer settings and other factors and apply those automatically in the future. As an example, Apple gives the start time of a track:

In another example, Apple suggests that skipped songs which are rarely listened to might be dimmed out or otherwise obscured in favor of songs that the user prefers. 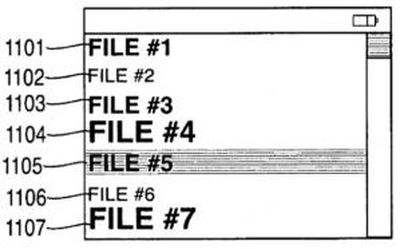 More frequently played songs appear larger.
Meanwhile, another application suggests that the iPod or iPhone could actively determine if there is enough battery life to play the selected video. If not, the user could be given a warning as well as options to degrade the video settings or reduce backlighting in order to prolong battery life enough to watch the entire selection. When not enough battery life is detected, a warning dialog would pop up giving the user an option to simply proceed or make the desired adjustments:

The System Does not Have Sufficient Power for Playing the Entire Selected Video Segment.

It seems this would be a welcome feature for travelers to avoid missing the last bit of a movie due to a low-running battery.