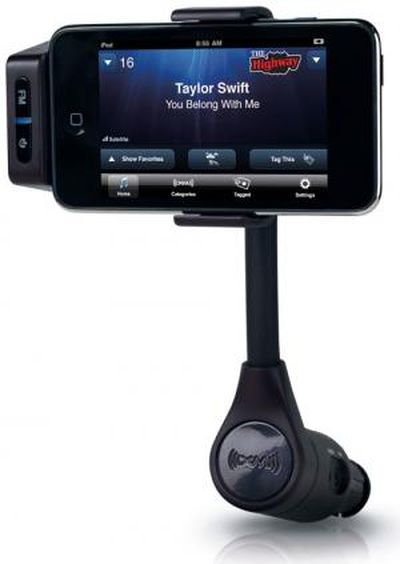 Digital Daily reports that Sirius XM announced at a media event today the launch of XM SkyDock, an accessory that will allow iPhone and iPod touch users to receive live XM and "The Best of Sirius" satellite radio in their vehicles. Scheduled to launch in the fall at suggested price of $119.99, the XM SkyDock utilizes a vehicle's cigarette lighter power port to mount and power the device and iPhone or iPod touch.

Dubbed SkyDock, the $119.99 peripheral uses iPhone OS 3's support for third-party hardware to transform Apple (AAPL) handsets into full-fledged satellite radios. Designed to run off a car's cigarette power adapter, the SkyDock charges your iPhone while you listen to it and supports the ability to tag songs for download from iTunes. Better yet, it gives users access to all XM and "The Best of SIRIUS" channels, even those the company infamously excludes from its online feed, like Howard Stern, MLB Play-by-Play and NFL Play-by-Play.

The XM SkyDock is compatible with all iPhone and iPod touch models and requires iPhone OS 3.0.

Rumors of the new accessory surfaced last week, although the reports had suggested a slightly lower price point of under $100.