iPhone 3.0 Update for iPod Touch Page Appears in iTunes, Not Yet Functional [Updated]

One MacRumors reader has discovered an iTunes page that appears to offer the iPhone OS 3.0 software update for iPod touch for download for $9.95. While iTunes permits the transaction to go through and prompts the user to connect their iPod touch to check for updates, iTunes subsequently reports that iPhone OS 2.2.1 is still the current version and does not download iPhone OS 3.0. 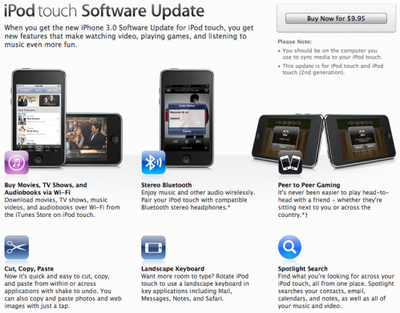 Interestingly, the Purchase History displays the purchase as "iPhone 2.0 Software Update" despite the purchase screen having clearly advertised iPhone OS 3.0.

iPhone OS 3.0 for iPhone and iPod touch is scheduled to launch tomorrow (June 17th) in most of the world. While Apple initially announced that iPhone OS 3.0 would be available on that date for "all customers", within the past few days Apple has updated its iPhone software update pages for Australia, New Zealand, and a number of East Asian countries to reflect that iPhone OS 3.0 will not launch in those countries until the 18th. Differences in time zones, however, mean that those countries may still receive the new operating system at the same time as the rest of the world.

Update: Apple has reverted its changes to the iTunes page, which once again refers to the iPhone OS 2.2 update.

Monday June 21, 2021 7:17 am PDT by Hartley Charlton
Users appear to be underwhelmed by Apple's upcoming iOS 15 and iPadOS 15 updates, according to the findings of a new survey by SellCell. The survey asked 3,000 iPhone and iPad users, evenly split between men and women, aged 18 or over in the United States, what they thought of iOS 15, iPadOS 15, and the naming of the upcoming iPhone 13 lineup. Over 50 percent of all of the survey's...
Read Full Article • 373 comments